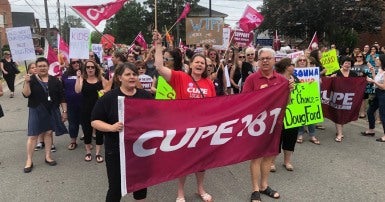 Fred Hahn, President of the Canadian Union of Public Employees Ontario (CUPE Ontario) joined front-line workers at Brant Family & Children’s Services (Brant FACS) and community members to rally against cuts to services for children and families, mandated by the Ford Conservatives, that prompted the entire Board of the Brant FACS to resign in protest today.

“It takes great courage for the board to resign rather than cut services for the community’s most vulnerable families,” said Hahn. “And it takes even greater courage for the Brant FACS workers, members of CUPE 181, who know the Ford Conservatives plan to slash the services they provide, to protest those cuts. The workers and the board of the Brant FACS have been fighting for these services their community needs, but the Conservatives refuse to listen. It’s time the Conservatives take charge of this situation and restore funding now!”

After the loss of more than $2 million in funding from the Ministry of Children, Community and Social Services, the Brant FACS was forced to lay off 26 workers in March. Due to years of underfunding and increased demands for services, the Brant FACS remains in a deficit position, which is not allowed under current legislation. In an open letter to the community on Wednesday, the board indicated they would rather resign today then cut more vital services from children and their families.

While addressing CUPE members and community members at the rally Hahn stated, “We need to protect these kids and their families. Reinstating funding to Brant FACS is about respecting our communities, the critical public services they need and the frontline workers who deliver them. Ford’s Conservative government is failing to do their job. They are supposed to be protecting and supporting these services that help our kids, not taking them away.”

The community is demanding that Todd Smith, Minister of Children, Community and Social Services and local Conservative MPP William Bouma take immediate action to support the services at Brant FACS and restore funding as soon as possible.

“The board is unwilling to lay off more staff to balance their budget. Layoffs come at a cost to families who rely on these services. It’s time Ford’s Conservatives, including our local MPP William Bouma, listen to these voices today who are pleading with them to restore funding immediately so that welfare, the lives of these children and families, are not compromised,” said Jennifer Kirby, President of CUPE 181.

The board of the Brant FACS is asking the Conservative government to address and resolve the funding crisis. Brant FACS is just one example of a province-wide, funding formula problem. “There are 18 agencies that find themselves in a similar situation across the province. The Conservatives need to act quickly to resolve this situation and the 18 agencies who are at risk of suffering the same fate as Brant FACS. Children are our future and they deserve a healthy supportive environment to grow and develop.” said Carrie Lynn Poole-Cotnam, Chair of CUPE Ontario’s Social Services Workers’ Coordinating Committee.