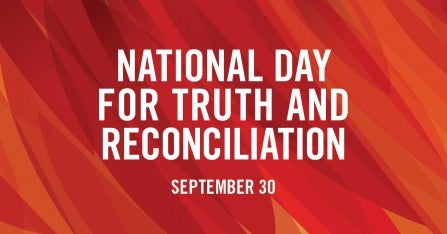 As a young girl, Phyllis was given a new orange shirt by her grandmother before being taken to a B.C. residential school. The shirt was confiscated and destroyed by her teacher on the first day of class. The destruction of Phyllis’ shirt has come to symbolize the colonial goal of residential schools to assimilate Indigenous peoples.

The ongoing recovery of mass graves sites near the locations of former residential schools has been a grim reminder of their legacy. CUPE continues to stand with Indigenous communities as they grieve these unjust losses within their communities.

“It’s a day that many Indigenous CUPE members will be observing to mourn those who did not return to our communities from these institutions.  Along with CUPE’s National Indigenous Council, I encourage all of our allies to use this day to learn about the history of the residential school system and to reflect on the harms that it has caused Indigenous people.”

September 30 is now a statutory holiday for workers in federally-regulated sectors. CUPE has prepared a guide to help members outside the federal sector bargain the new holiday into their collective agreements. The guide is provided to locals as part of CUPE’s commitment to support reconciliation and justice for all Indigenous people.