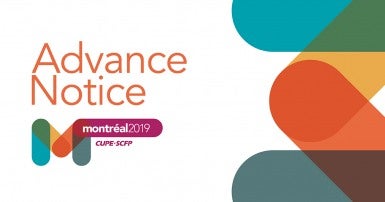 Resolutions and proposed constitutional amendments must be received no later than July 9th, 2019. A copy of the convention resolutions book will be posted on CUPE’s website 30 days prior to the convention. Please refer to here for resolution format and recommended procedures or see the Advance Notice PDF below.

Registration for the national convention will not open until AFTER the official call and credential forms are sent in July.

2019 CUPE National Convention Assistance Fund Application
Applications for assistance must be made no later than JUNE 14th, 2019

2019 CUPE national awards
All nominations must be completed no later than July 9, 2019.