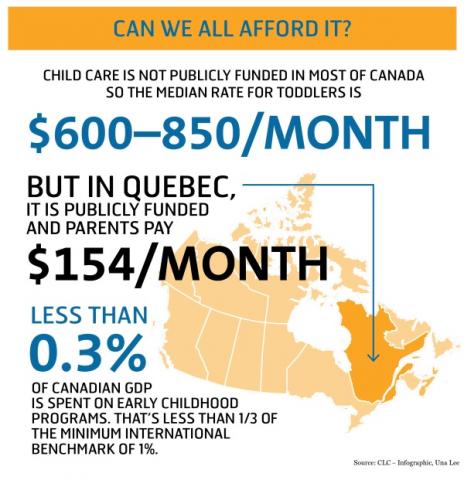 Study after study shows that public spending on child care should be a top priority. The wide-spread and long-lasting economic, social, and health benefits for children, families, and society far outweigh the costs. However, Canada is last among its peer countries on public spending on child care. Despite all the evidence, the federal Conservative government persists on ineffective high-cost proposals such as income-splitting and the Universal Child Care Benefit.
In 2011, the Harper conservatives made an election pledge that they would allow couples with children under 18 to split up to $50,000 of their income each year for tax purposes. This would reduce what the household would pay in taxes to the Canada Revenue Agency.
The Canadian Centre for Policy Alternatives (CCPA) study, Income Splitting in Canada: Inequality by Design, showed Canadians that the Conservative plan to extend income splitting to families with children under 18 would provide no benefit to 86 per cent of all families. Meanwhile the cost to the federal government would be $3 billion and the cost to the provinces would be $1.9 billion for a total loss of revenue in 2015 alone of nearly
$5 billion.
The recent resignation of Federal Finance Minister Flaherty would in part explain why after the last federal budget he specula­ted that the Conservatives may not pursue an income-splitting scheme. Whatever signals Flaherty was trying to send, the Prime Minister has repeated several times that some form of income splitting will be introduced by the Conservatives.
So what does all of this have to do with child care?
There is talk that the Conservatives may be contemplating increasing their much criticized universal child care benefit. “Income-splitting and the child benefit cheque are examples of using public policy to trade down instead of trading up,” said Trish Hennessy, Director of Strategic Issues with the CCPA.
The Universal Child Care Benefit (UCCB) provides $100 a month per child until they are six years of age and costs about $2 billion a year. It delivers little to families in terms of its stated goal to provide choice in child care arrange­ments. The benefit is fraught with unfairness in terms of an income transfer and it does absolutely nothing to address the pressing crisis faced by most families in having available affordable child care. 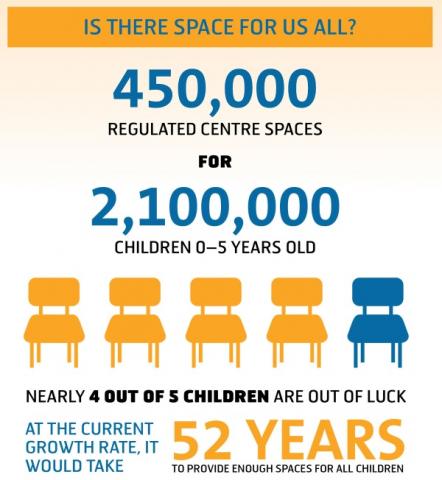 There is a dire shortage of regulated child care for families across Canada. “Canadians are offered a small array of boutique items that cost more and deliver less than a direct investment in a universal child care program would. Such a program would present parents with better options and a greater bang for our collective tax buck. At the end of the day, parents in Canada are still in search of affordable, high quality child care— they’re still faced with a lack of options,” said Hennessy.
When you add up the combined cost of income-splitting that benefits the rich and child benefit cheques that don’t buy quality child care, the missed opportunity costs are huge. Canada could accomplish so much more. If Canadian governments are concerned about supporting families with children, they could provide a universal child care program similar to the Quebec model for affordable child care for all families. It is time to rethink child care.