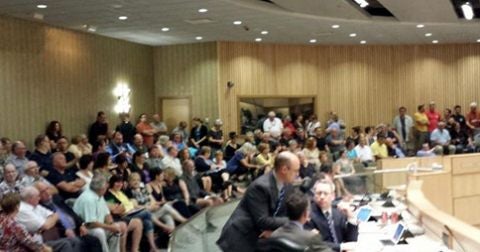 Over a hundred workers and retirees concerned about the future of the Regina Civic Pension Plan attended the July 28 city council meeting to call for the City to honour the deal it signed with employee unions last year.

The future of the pension plan is in question because the provincial regulator recently announced he was threatening to cancel the plan unless a deal was reached between the employers and its unions.

This came as a surprise to workers as the City and its unions agreed publicly to a pension deal just over a year ago.

This deal made the pension plan stable, sustainable and affordable for all sides, while still delivering modest defined pension benefits. The signed agreement reduced the cost of the plan by one quarter and shifted even more of the future risk from the City to workers.

Since then, the City has shown little interest in negotiating the outstanding items in good faith. Instead, it has tried to back away from the deal and put forward new proposals that will amount to significant concessions to plan members, including further changes to contribution rates, benefit levels and major restructuring of the design of the plan.

Now the provincial regulator (the superintendent) is threatening to cancel the pension plan, which creates uncertainty for plan members, especially retirees.

Workers and retirees from all unions impacted are joining together to stand up for the pension deal they fairly negotiated. They have launched a campaign to call for the City to “Honour Our Deal”.

The Regina Civic Pension Plan has provided defined benefit pensions for city workers since 1958. There are 4,000 active members and more than 2,000 pensioners in the plan. Plan members contribute to the plan throughout their careers, and over the years they earn a modest but secure benefit in retirement. The average pension for pensioners in the plan is currently a modest $1,600 per month.

Retirees are worried that the cancellation of the plan will result in a cut in benefits – a cut that many of them can’t afford. Current workers are worried about what more concessions will mean for their ability to retire with dignity.

After a lifetime of work for the public good, workers deserve a secure retirement.

If you would like to take action to ask the City of Regina and the province of Saskatchewan to “Honour Our Deal”, please visit www.honourourdeal.ca.