The Comité Campesino del Altiplano (CCDA) is a Mayan small farmers and rural workers’ movement that works to defend the rights and culture of Indigenous peoples in Guatemala. CUPE participated in a trade union delegation in March 2017, hosted by the CCDA.

The delegation travelled to Guatemala to learn more about the diverse efforts of grassroots organizations to defend the rights of Indigenous communities. The delegation also learned about the movement to improve the livelihood of Mayan farmers in the country through initiatives based on social justice, political action, and fair trade.

The Mayan people represent over 50 per cent of the population of Guatemala. During the 1980’s the Guatemalan army waged an unrelenting war against Mayan communities and social activists. The resilience of the Mayan people is inspiring. Their resistance during the war, and their continuing efforts to defend their Indigenous rights and culture has been remarkable. Despite constant threats, Mayan families continue to demand justice for their missing and murdered family members.

The CCDA was created in 1982 to defend the rights of workers on the large coffee plantations. When the war ended in late 1996 and the peace accords were signed, the CCDA obtained several coffee plantations for its members. Workers run the plantations, and their coffee is processed in several mills that are collectively-owned. The coffee, called “Café Justicia” (Justice Coffee), is sold to Canadians through an extensive network of not-for-profit organizations committed to the principles of solidarity.

The delegation was led by Education in Action, the Public Service Alliance of Canada (PSAC) Social Justice Fund, and the Maritime-Guatemala Breaking The Silence (BTS) network. 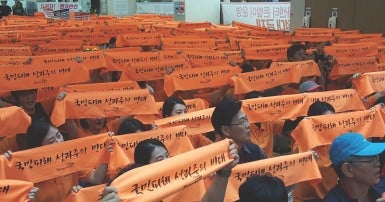 An international delegation made up of ten trade union representatives from around the world travelled to South Korea in September 2016 with the goal of supporting the Korean public sector workers’ strike, the largest public sector mobilization in their history. National Secretary-Treasurer Charles Fleury led CUPE’s delegation and expressed solidarity to thousands of South Korean public sector workers. CUPE was hosted by the Korean Federation of Public Services and Transportation Workers’ Unions (KPTU).

This historic public sector mobilization in opposition to neoliberal reforms and in defence of collective bargaining and trade union rights was an opportunity for CUPE to show our solidarity in action. Tens of thousands of workers across the public sector walked off the job and CUPE stood with them in the streets of Seoul, South Korea’s capital city.

The international labour delegation was shocked when the Korean government and employers labelled the peaceful and lawful strike illegal for railway workers, and suspended over 800 subway members and union leaders from their jobs. The international delegation spoke against the government and employer practice of refusing workers’ proposals to collectively bargain, while using the excuse of maintaining normal services to bring in inexperienced strike-breakers (scabs) in the rail and subways, causing grave dangers to public safety.

The recent impeachment and arrest of the right-wing South Korean President Park Guen-Hye, on allegations of corruption, has provided some reprieve for trade unions in the country now. In the global struggle against neoliberal, anti-worker attacks, the delegation committed to continuing efforts to build international solidarity with our sisters and brothers on the front line in South Korea.

After three years, and a serious escalation of repression in the Philippines, CUPE decided 2016 was an important year to visit our Global Justice partner organizations to gain a better understanding of the changing conditions in the country and to determine how best to be in solidarity. We led a trade union delegation to the Philippines in July 2016.

The delegation participated in the 2nd International Conference on Human Rights and Peace in the Philippines and a solidarity mission to communities most severely affected by military operations and human rights violations in Mindanao and other parts of the country.

The Alliance of Concerned Teachers (ACT) facilitated our entry in several communities struggling against labour rights violations, housing demolitions, land grabbing and militarization. ACT has a strong presence in the southern Mindanao region of the Philippines, where the five high-profile members of the Indigenous Lumad community, including the director of a tribal school, were killed in 2015 when the military presence increased in the region. Dozens of Lumad schools were forced to halt operations due to military harassment and at least 84 attacks on 57 schools displaced and disrupted the education of over 3,000 Lumad children. They are still struggling to return to their communities today.

The delegation met with our partner organization the Confederation for Unity, Recognition and Advancement of Government Employees (COURAGE), the largest labour confederation in the Philippines, who experienced and continue to fight back against threats, harassment and surveillance of their leaders and organizers.

Following the 2016 election of Philippines President Rodrigo R. Duterte, CUPE National has supported several calls for justice and peace in the country. We have sent letters expressing our support for the resumption of the peace talks between the Government of the Philippines (GPH) and the National Democratic Front of the Philippines (NDFP), and have called for the release of all political prisoners and for a stop to the so-called “war on drugs” linked extra-judicial killings.

In May 2016, we participated in CoDevelopment Canada’s 2016 Maquila Solidarity Tour to Nicaragua and Honduras. A delegation of ten union sisters travelled to Central America to express solidarity with the maquila workers and organizers in the textile industry where many multinational corporations are exploiting workers. The focus of the tour was health and safety and gender rights.

CUPE has a long history of solidarity with our Global Justice Fund partners and host organizations, María Elena Cuadra Movement of Employed and Unemployed Women (MEC) in Nicaragua and the Honduran Women’s Collective (CODEMUH).

MEC is a remarkable organization that has earned a national and regional pro le in Nicaragua and Central America. From their origins as a small group of women organizing underground and facing violent repression for their activism, they have become a respected national organization.

In January 2016, the government passed legislation increasing the minimum wage in the free trade zone by eight per cent in Nicaragua. With a core inflation rate of 5.85 per cent, this raise was important. However, it is also long overdue. In 2015, maquila sector workers received a zero per cent increase while other sectors saw their salaries increase. Given that women represent 75 per cent of workers in the maquila sector, this was a clear example of the systemic discrimination against women that MEC battles against.

The Honduran Women’s Collective (CODEMUH) organizes workers to address their immediate needs such as work-related injuries and illnesses, as well as advocating for workers’ rights and systemic change to Honduras’ labour laws.

In the City of San Pedro Sula, Honduras, the delegation observed a protest at the Ministry of Labour. Women demanded that the minister follow the Supreme Court order to have ergonomic assessments done in the maquila sector and to review their current 12-hour work shifts. Women workers stood united against a government that does not provide protection from violence or other health and safety violations. They demanded “Jobs Yes, but with Dignity.”

The Canadian delegation learned how important it is to experience firsthand the courage and resilience of the women of CODEMUH and MEC, who are fighting for economic and social justice in Honduras and Nicaragua, and raising the standards for workers around the world.

The World Social Forum (WSF) is one of the world’s largest gatherings of social movements and civil society.

In August 2016, the WSF brought thousands of activists to Montreal to work in common cause for social justice, democracy, the environment, and international solidarity.

CUPE led a delegation from across the country to the WSF to strategize around a wide range of topics, including the impact of free trade on public health care, “Blue Communities” and public water, collective bargaining, and energy democracy.

One of the main outcomes of the event was a joint declaration calling for an end to austerity budgets and the commodification of public services (privatization). The strengthening of public services was the clearest way to combat rising income inequality and environmental degradation. The growing influence of private finance and the profit motive in health care, education and energy was linked to reduced access to good quality, universal services and to driving down working conditions around the world.