Who do Ontarians want to respond when they call 911? – 83 per cent say ambulance paramedics, not fire for medical response 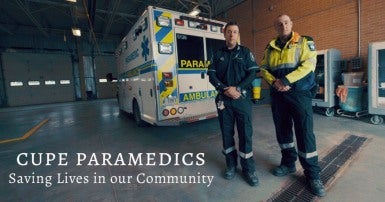 A new provincial poll shows that Ontarians aren’t on board for recent Liberal government changes that would redirect 911 medical calls away from paramedic ambulance services to fire departments.

The poll was conducted late in 2017, immediately following the passing of changes to the Ambulance Act that could allow fundamental changes to 911 emergency medical response and pre-hospital care, say paramedics with the Canadian Union of Public Employees (CUPE). These changes include allowing pilot projects in “willing” municipalities to experiment with using firefighters who also have a paramedic designation to respond to pre-hospital emergency medical calls.

When asked directly whether they would support government replacing an ambulance service response to some 911 medical calls with a fire department response, more than 70 per cent of respondents said they were against the change. Just over 65 per cent said they didn’t think allowing municipalities to replace ambulance services with fire department services on 911 medical calls would improve patient care.

The polling shows “that the province really doesn’t have Ontarians’ support to alter 911 medical response to redirect medical response to fire departments. Our findings show there is really no appetite for this. Ontarians understand both the patient care implications and the higher costs that will be incurred by municipalities if the province goes through with this model.

“The paramedics whom CUPE represents are strongly urging this government to put resources into enhancing ambulance paramedic response, not these fire experiments,” says Jason Fraser, chair of the CUPE Ambulance Committee of Ontario (CACO), which represents more than 5,500 paramedics at ambulance services province-wide. There are about 8,000 paramedics in Ontario.

To date, no municipality has volunteered to run a pilot, although the province has said trials would be in place by March 2018. In fact, municipalities, through their provincial umbrella group, have come out against moving to a medical response through fire departments. A paramedic fire model would increase costs for municipalities as an hour of fire service is 55 per cent higher in cost than an hour of ambulance service. Municipalities pay 100 per cent for fire services through the local tax base while the province pays 50 per cent of ambulance-based paramedic services.

Studies confirm that emergency medical calls are increasing, while the number of fires is declining. Nearly 62 per cent polled said they agree that the provincial government should study the public health and economic potential for moving resources from services that have a declining need, such as fire calls, to services that have an increasing need, such as ambulance-based paramedic calls. “We need rational planning for our emergency services, not politically driven decisions. It appears that the only supporters of this model are the firefighters’ association that proposed it and the provincial Liberals that are facilitating it,” says Fraser.

Polling was conducted by Public Polling and has a margin of error of plus or minus 3.82 per cent, 19 times out of 20.