Minimum wage should do this one important thing 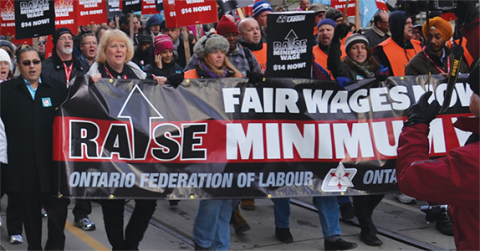 After years without raises for the lowest paid workers, improving the minimum wage is becoming a priority in Canada and the U.S.

Workers at fast-food restaurants and big box stores, many of whom depend on food banks to survive, have recently engaged in demonstrations and strikes calling for an increase to the minimum wage.

American workers are asking for an increase from $7.25 to $15 per hour. In Ontario, the Workers’ Action Centre and the Ontario Federation of Labour are campaigning to raise the province’s minimum wage from $10.25 to $14 per hour.

Politicians are feeling the pressure, but the numbers they float are considerably lower than what workers are asking. In his state of the union address, President Obama spoke in favour of raising the U.S. minimum wage to $10.10 per hour. Ontario Premier Kathleen Wynne promised to increase minimum wage to $11 per hour in June, then index it to increases in inflation.

Some economists and commentators have responded by claiming minimum wage increases will damage the economy, even going so far as to claim it will hurt the poor. They rely on a standard economic analysis that higher prices lead to lower demand. So if wages increase, employer demand for workers will fall.

But this analysis ignores the fact that many corporations are sitting on excessive profits and idle cash. Close to half of all minimum wage workers are employed by these large companies, and that number is growing rapidly. A boost to wages would put more money back in consumer pockets, and ultimately boost the economy.

Plus, paying higher wages could encourage businesses to invest more in their employees. Investing in workers reduces turnover, boosts productivity and increases competitiveness.

In a 2013 poll, leading economists were asked about the effects of minimum wage on employment. Some responses were mixed, but a solid majority believe the overall benefits exceed costs. More recent studies have shown either small or negligible effects on employment, and even that higher minimum wages could actually increase overall employment and stimulate the economy.

Almost all critics miss the fundamental point: a decent wage should not be determined by economic calculus. Full-time jobs should pay enough to keep workers out of poverty, without the need for charity, trips to the food bank, or tax credits that indirectly subsidize low wage employers.

Check out our living wages article in the Winter 2012 issue of Economy at Work at cupe.ca/economyatwork.