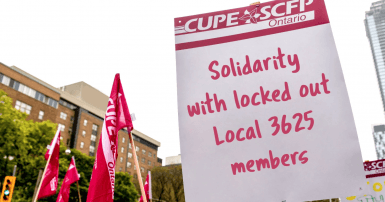 Members of CUPE 3625, who work as Early Childhood Educators at Something Special Children’s Centre, have been locked out of their workplace since Friday November 1 at 5:30 p.m.

The decision was made by Something Special after they rejected the union’s latest offer on Thursday afternoon.

“It’s really unfortunate for the parents and children that it has come to this.  We’re not asking for much,” said Jen Oliver President of CUPE 3625, “we’re just trying to protect what is already in our contract, vital health benefits that we only use in the event of a serious illness or injury. No one wants to be forced with the choice of either coming into a workplace full of children while we are sick, or not being able to make rent because we don’t have any sick days. I think parents can sympathize with where we are coming from.”

The primary issue in negotiations is a concession on protections for workers with serious injuries or illness.

“We’re not sure why they are being so aggressive in trying to roll back our health protections. They have initiated every move that has brought us closer to this lock out,” Oliver said, “We don’t want to be out walking a picket line, we would rather be doing our jobs, but what they are trying to force us to accept will leave workers unprotected and will compromise the service we provide. We can’t allow this to happen. It’s as simple as that.”

A picket line will be set up on front of Something Special Children’s Centre at 10 Chapman Street in Kingston on Monday morning.

“We remain available and willing to bargain at any time, but there has to be something to talk about,” Oliver said.  “So far our employer has just repeated the same demand and then pushed us toward a lock out. Now that they’ve pushed us out the door, there is nowhere left to go, so hopefully they come to the table ready to actually negotiate.”