One of the first priorities of the newly re-elected federal Liberal government is a $6 billion personal income tax cut. The Liberals and Conservatives campaigned on similar promises, but the Liberals claimed their cut was more progressive. No matter how you slice it, cutting taxes reduces the amount of money available to provide services, and this specific tax cut goes mostly to higher income earners. There’s nothing progressive about that.

It’s especially worrying that the new government’s first priority is a tax cut, given how deeply federal governments have cut taxes over the past 20 years. Jean Chrétien and Paul Martin cut corporate tax rates from 27 per cent to 21 per cent between 2000 and 2004, and cut the capital gains inclusion rate from 75 per cent to 50 per cent. Capital gains is income from selling an investment asset like real estate (other than a primary residence), or stocks, and it is treated differently than employment income. The inclusion rate is used to calculate what portion of the profit is considered income for tax purposes.

Stephen Harper also made steep cuts to the federal government’s fiscal capacity, cutting the GST by two percentage points before the 2008 recession, and further reducing corporate tax rates from 21 per cent to 15 per cent. 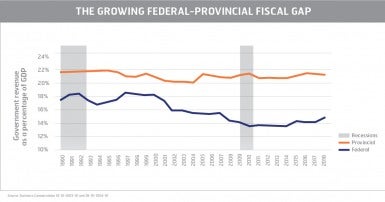 These cuts have left a huge hole in the federal budget. Restoring federal revenues to 2000 levels would mean an extra $75 billion per year – more than enough to fund universal Pharmacare, dental care, home care and long term care. Imagine how much better off we’d all be if that money had enhanced our public services rather than padding wealthy pockets.

Federal tax cuts have had a ripple effect across provincial budgets. When Stephen Harper cut the GST, he suggested provinces could easily recover the lost revenue by raising provincial sales taxes. But provincial governments have faced backlash at the ballot box when attempting to raise revenue, and have only managed to maintain the status quo on revenue as a share of GDP. 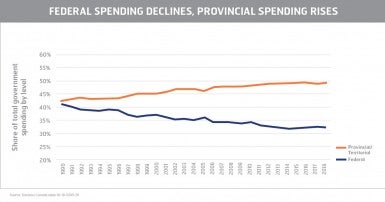 During the election, the Conservatives promised a ‘universal tax cut’ that would have reduced the rate of the lowest income tax bracket. The Liberals countered by promising to increase the basic personal exemption for most people (it doesn’t change for those with earnings above the highest tax bracket, which in 2019 is set at $210,371).

How are these different? Take the average full-time CUPE worker earning around $50,000 per year. The tax system breaks their income into chunks and establishes rates for different levels of income.

The Liberal plan will increase the tax-free portion of income by almost $2,000 in 2023. The Conservative plan would have decreased the rate paid on the next chunk, from 15 per cent to 13.75 per cent. 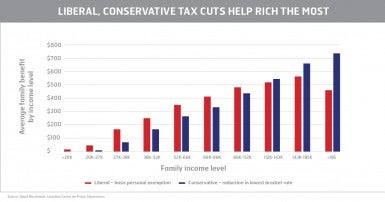 Since the Liberal plan kicks in at lower income levels, it’s clear why they claimed it was a better plan. But when the Canadian Centre for Policy Alternatives ran the numbers through Statistics Canada’s tax data software, there wasn’t a big difference between the plans. Higher income families benefit the most from both plans, with the Liberal plan phasing out for the top 1.5 per cent of income earners, making it slightly more progressive. For the average CUPE member, even if they get the full amount of the benefit from the increase in the basic personal amount, it works out to less than $25 a month.

The NDP election platform included a wealth tax and restored the capital gains inclusion rate to 75 per cent, and the corporate tax rate to 18 per cent. The NDP planned to invest this money in establishing a universal Pharmacare program and public dental insurance, and expanding public transit and affordable child care. Looking at the size of recent tax cuts, it’s clear Canada can quite reasonably afford these investments by making moderate improvements to overall tax fairness.