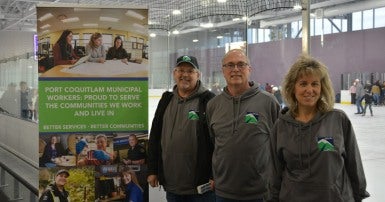 More than 200 Port Coquitlam residents enjoyed a free skating event thanks to the work and support of CUPE 498, the Port Coquitlam Municipal Workers. Kids, families, couples and seniors alike participated in the free, hour and a half-long event, held November 30.

“Our members serve the community every day through their work for local government, but we still felt that we could do more,” said Sheryl Savage, CUPE 498 Treasurer and event organizer. “We exist to serve the community, and that principle extends to our union work as well.”

As part of the event, CUPE 498 members covered the cost of the ice time plus helmet and skate rentals and provided free food and prizes to those in attendance. The event was funded in part through a cost share campaign with CUPE National designed to better educate the public about the many ways CUPE municipal workers support the communities they work and live in.

“This has been the best part of our campaign to-date because it brings us closer to the community we serve,” said Savage. “We are already talking about plans for more events like this next year.”

The free skate was held in the newly constructed Port Coquitlam Community Centre, a 205,000 square foot public facility being constructed in phases a few blocks from the downtown core. Once completed, the facility will house three ice sheets, a pool, fitness centre, community rooms, a games room, sports courts, and a food concession. The facility also hosts the Terry Fox branch of the Fraser Valley Public Library.

“This Community Centre brings together the best elements of public ownership and operation,” said Bob Smejkal, CUPE 498 President. “It has hardworking, dedicated CUPE 498 members who love working for the public housed in a state-of-the-art facility designed with the public good and the needs of residents in mind.”