As in 2016, infrastructure spending featured prominently in the 2017 federal budget. To demonstrate the government’s commitment, the word “infrastructure” appears nearly 200 times in the budget document.

However, repeating the word “infrastructure” many times masks the fact that the government does not commit to any new spending in this year’s budget. Instead, the budget provides more detail about nearly $96 billion in infrastructure spending previously announced in the 2016 budget and 2016 Fall Economic Statement, and outlines how that funding will be allocated over the next 11 fiscal years.

Budget 2017 didn’t provide much additional information about the controversial Canada Infrastructure Bank (CIB) announced in the fall economic update, which is designed to “leverage” private sector investment in infrastructure. However, further details were revealed deep in the federal Budget Implementation Act 2017, tabled on April 11, 2017.

Embedding legislation to establish an infrastructure bank in an omnibus budget bill severely restricts debate about the merits of individual elements. This move is disturbingly reminiscent of former prime minister Stephen Harper’s use of omnibus budget bills - a move that was appropriately criticized for being contemptuous and antidemocratic.

The proposed Act confirms the federal government will provide $35 billion for the bank, to be invested along with private financing. While the Act doesn’t specify what sectors the bank will invest in, Budget 2017 indicates it will be in “transformative infrastructure projects” with revenue-generating potential, including public transit, trade and transport infrastructure (such as toll roads and bridges), and “green infrastructure, including those that reduce greenhouse gas emissions, deliver clean air and safe water systems, and promote renewable power.” This budget has allocated $5 billion to each of these areas.

The government plans to have the bank up and running by late 2017. It will be established as an arm’s-length crown corporation with a CEO and board. The bank will be accountable to Parliament through a minister and subject to audits by the Auditor General. However, this would be at a lower standard and with less transparency than the Auditor General has over direct government departmental spending and the Auditor General may not be able to review specific projects to judge whether they provide value for money to the public.

Disturbingly, the proposed Act mandates that the board will have no direct representation from federal, provincial or municipal governments. Equally troubling, the Act stipulates that the bank must keep secret all information relating to proponents, private sector or institutional investors, except in exceptional circumstances.

The bank will also act as a centre of expertise on infrastructure projects for private sector or institutional investors to make significant investments. In other words, it is likely to become a “bank of privatization” as CUPE had warned last year.

This new bank is likely to lead to privatization of airports, public transit, highways and bridges, water and wastewater systems, hydro-electric utilities and transmission grids. This privatization – whether through full or partial asset sales, or through P3s – will directly affect the employment of CUPE members in these sectors, result in higher user fees for the public, and is also likely to require higher public payments over the long term, all to pay for the higher returns and profits demanded by private finance.

Many have questioned the need for an infrastructure bank at all, or have argued that the infrastructure bank should rely solely on public financing as other public investment and development banks do.[1] While it is true that large private sector investors in Canada like pension funds are looking for domestic opportunities to invest in safe infrastructure projects, it is not clear from a public policy perspective why the federal government should assist them in this way.

As designed, the bank represents another broken promise from the federal Liberals. In the Liberal election platform and ministerial mandate letters, Prime Minister Justin Trudeau promised his government would “establish the Canada Infrastructure Bank to provide low-cost financing for new infrastructure projects.” However, this proposed bill shows that the Liberal government has taken a 180‑degree turn shifting from providing low-cost financing to “leveraging” higher-cost private sector financing for infrastructure.

Governments can finance infrastructure projects at a much lower cost than private investors because they can borrow at much lower interest rates. However, using private financing in place of government funding keeps infrastructure investments “off book,” making the appearance of balanced budgets more possible. It’s a cynical strategy that masks the fact that private investors will be paid back by the federal government, and that they will “earn” healthy returns on their investments, unnecessarily driving up the cost of infrastructure financing. The higher cost of private finance could double the cost of these infrastructure projects, which will mean ultimately higher costs for the public, through higher user fees and/or public payments.

The 2016 federal budget committed the government to $11.9 billion in infrastructure spending over five years, as part of “Phase I” of its infrastructure program:

An additional $2.5 billion previously committed to infrastructure is being re‑allocated in 2016‑17, earmarked for post-secondary institutions and broadband access. This brings the revised 2016‑17 infrastructure commitment total to $14.4 billion.

Budget 2017 indicates that the bulk of this funding will be consumed in the first three years of Phase I, allocating nearly $13 billion by 2018-19. That year marks the expiry of the Public Transit Infrastructure Fund and the Clean Water and Wastewater Fund, which were set up to disburse infrastructure spending on transit and water and wastewater systems through bilateral agreements with provinces.

In the 2016 Fall Economic Statement the federal government announced an additional $81.3 billion in infrastructure spending, over 11 years, beginning in 2017‑18. Budget 2017 provides details of how this funding will be allocated.

Most of this funding ($60.2 billion) flows in the last six years of the 11‑year plan. Just $21.1 billion flows in the first five years, ending in 2021‑22. Details of the funding allocated for specific program areas, by year, are provided in Table A1.13 on page 266 in an Annex close to the end of the main budget document. Highlights include:

The “social” infrastructure plan contains a large funding commitment for affordable housing, including $5 billion over 11 years for a National Housing Fund, $3 billion for federal-provincial-territorial partnerships in housing, over $2 billion for tackling homelessness, $2 billion for Indigenous communities and another $225 million for housing for Indigenous peoples not living on reserves.

One major change from a year ago is that the federal share of funding for projects undertaken with municipalities will be lowered to a maximum 40 per cent of total project cost, down from the 50 per cent amount for projects receiving Phase I funding.

The infrastructure commitments detailed in federal Budget 2017 are a step forward in some areas, notably the commitments to affordable housing. However, Budget 2017 will also lead to much more serious steps backwards in other areas, as the proposed Canada Infrastructure Bank ends up becoming the Liberal’s bank of privatization. 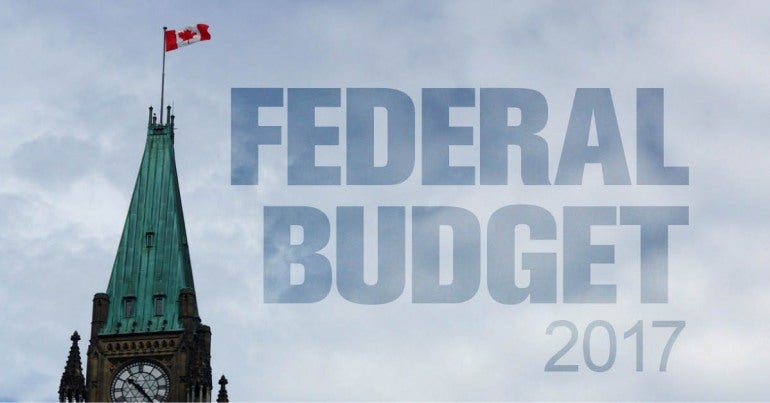 Long on talk, short on action: CUPE Summary and Analysis of the 2017 Federal Budget