Over the 90s, CUPE learned how to move public opinion and gain widespread support for the public services Canadian families count on.

The world seemed to shrink a little in the 1990s. Cable television, mobile phones, email the World Wide Web were shaking up way people worked. Deficit hysteria at both the federal and provincial level lead to spending cuts.

In Ontario, the Conservative Harris government’s full-on assault on workers and public services spurred hundreds of thousands to the streets in 11 cities for the Days of Action.

And in Quebec, CUPE leaders were sent to jail for standing up for their workers’ rights. Jean Lapierre and Denis Maynard, were given six months after a demonstration opposing a bill that allowed municipalities to cut and freeze wages.

The threats of privatization and deregulation presented themselves on a new front: globalization. CUPE saw the threat and was a leader in calling for trade agreements that protected the things Canadian families value.

Globalization also put the spotlight on another issue that CUPE would be known for: water. Our message: Water is a public resource that must remain in public hands.

A five-day province-wide strike in Newfoundland led to better wages and pensions.

39,000 members of the Hospital Employees’ Union in B.C. voted to become a provincial service division of CUPE.

True to our commitment that ALL workers had a right to a union and a voice, CUPE reached out to underrepresented workers. Young people. Workers with disabilities. Aboriginal, Metis and Inuit workers. 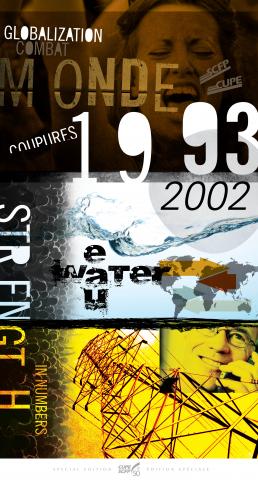