Workers must be at the heart of any pandemic recovery plan, CLC’s Bruske tells CUPE delegates 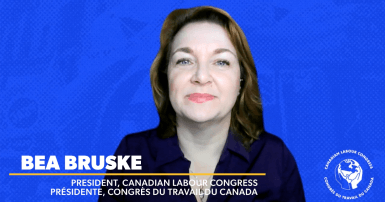 Bea Bruske, president of the Canadian Labour Congress (CLC), addressed convention delegates on Wednesday afternoon. Elected in June, Bruske’s appearance at the virtual convention marked her first time addressing a national gathering of CUPE members as president of the CLC.

She began by recalling her experience in her union, which began as a teenager working in a grocery store in Winnipeg, Manitoba and resulted in her walking a picket line for 125 days. Through this experience she learned the power that workers have when they unite, a lesson that she has carried with her throughout her time in the labour movement.

Recognizing that she was speaking delegates on a virtual platform instead of in person, she commended CUPE members for the work they have done to keep services running across Canada during the COVID-19 pandemic. “You risked your own health and safety to provide essential services to our communities,” she said, “you have gone above and beyond. And yet too often, your work is undervalued and underpaid.”

Bruske highlighted the CLC’s campaign for a worker-centered pandemic recovery. This campaign is not only an opportunity to advocate for better wages and working conditions, but it is also a chance to use the minority-government situation to push for necessary fixes to health care, child care, long-term care and pharmacare as well as affordable housing and a just transition from fossil fuels.

With her co-officers Lily Chang, a proud CUPE 79 member, Siobhán Vipond, and Larry Rousseau, Bea and Team Unite have reinvigorated the CLC and are ready to take on the challenges that lie ahead. They launched one of the CLC’s largest mobilization campaigns during the federal election and have increased pressure on MPs through e-actions and virtual town halls. Bruske invited CUPE members to get involved in the CLC’s campaign to build a better Canada by visiting Forward Together: A Canadian plan.