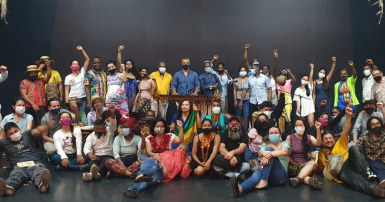 Graduates from NOMADESC’s 2021 Intercultural University of the Peoples in Colombia.

This year, CUPE continued to work in solidarity with workers and communities in many countries and strengthen long-term partnerships through our Global Justice Fund. The fund is one way our union supports global movements for human rights, labour protection, peace, and justice.

Through the fund and our relationships with workers around the world, we support and engage with trade unions and social movements that are organizing the most oppressed and marginalized among us. Projects give CUPE members opportunities to build relationships with workers around the world. CUPE is proud to support projects where members can connect with, and learn from, activists opposing violence and war, defending land rights, and demanding decent jobs, strong public services, living wages and safe workplaces.

This project will support Migrante Canada organizing workshops about the situation of temporary foreign workers in Canada. The workshops will target migrant, racialized, low-income and precarious communities and undocumented/non-status workers, with a focus on ending labour trafficking and regularizing migrant workers by providing them with official immigration status. Migrante Canada is a Canada-wide alliance of Filipino migrant and immigrant organizations focussing on the rights and welfare of migrant workers, and the conditions that force global migration.

This project will give CUPE members a deeper understanding of who undocumented/non-status migrants are, why they are undocumented, and the challenges and barriers they face. The goal is to strengthen the capacity of CUPE members to speak up and take action as allies, including policy advocacy to support permanent immigration status for all migrant workers.

The Network is a Central American-wide coalition of seven women’s rights organizations with a focus on maquila (sweatshop) workers’ rights. The Network advocates for national and regional policies that address the root causes of labour rights violations that maquila workers face.

Through this project, The Network will work to strengthen the political advocacy capacities of its member organizations. It will also increase participants’ knowledge about the causes of workplace accidents and occupational illness, as well as focusing on prevention and the laws that should protect workers.

Connecting women’s organizations in four countries gives their advocacy for maquila workers greater regional impact. Working together, they can influence the Central American Parliament’s labour and investment policies. They can also make it more difficult for transnational corporations to escape their responsibilities to workers by moving to a neighbouring country.

Black, Indigenous and campesino communities are facing a wave of extreme violence. The communities where NOMADESC partners work and organize are experiencing increasing human rights violations. During the COVID lockdown, the Colombian police used the task of enforcing the curfew as cover to target activists, while paramilitary forces, knowing that rights defenders could not take their usual precautions, began to hunt them down in their homes.

The project aims to educate CUPE members about the repression people in the Colombian labour and social movements are facing, and to highlight the struggles Colombian activists and communities are waging in response.

This project will strengthen SINTRACUAVALLE’s ongoing citizen education campaign to mobilize against water privatization and will support the union’s ability to continue to organize workers in the water sector.

SINTRACUAVALLE is the union representing workers at Colombia’s only public water provider. ACUAVALLE serves more than 700,000 water users in 36 municipalities in the province of Valle del Cauca. The leaders and members of SINTRACUAVALLE are leading a courageous fight against water privatization, undeterred by threats and violence.

The project encourages members of civil society, water users, unions, and non-governmental and social organizations to develop joint actions with water workers who are members of SINTRACUAVALLE.

This project will focus on union education for union representatives and members on labour legislation, health and safety regulations and raising awareness about workers’ rights and promoting better protections for workers.

Training plans also include an orientation about vaccination rollout in Havana province, which got underway in May 2021. SNTAP helped organize vaccination drives at work sites where it represents the workers. The Cuban government is working to fully vaccinate all residents by the end of 2021. Future project plans include worker-to-worker union educator exchanges when travel is possible.

The goal of this project is to support and build solidarity with the struggle of indigenous Mayan communities in Guatemala for land rights and human rights, and to connect CUPE members to their movement. This project supports community leaders in Guatemala developing their knowledge and skills, with the long-term goal of achieving sustainable agrarian (rural) communities that have legal titles to their lands.

The Campesino Committee of the Highlands (CCDA) defends the rights of workers on coffee, sugar, and cotton plantations. CCDA also works to recover lands taken from the Mayan communities over centuries and promotes Mayan culture and spirituality. Defending water rights is another priority for the CCDA. About 100 communities in 11 Guatemalan provinces belong to the CCDA.

The Confederation of Public and Private Sector Workers (CTSP) fights for accessible, quality public services in Haiti. It is committed to union member training, and to defending and protecting the interests of the country’s workers. The CTSP engages on issues and represents its members at the national level, and also undertakes regional training and awareness campaigns for workers in all sectors.

CODEMUH is a feminist, community-based organization that fights gender-based violence and addresses violence and health and safety in the manufacturing sector and textile factories. The collective provides workers with organizing support, as well as training, medical and legal support.

The project will raise awareness in Canada about the situation of women in Honduras, especially those working in the free trade zones. It will create opportunities for CUPE members to support and learn from their struggle.

This project supports MEC’s work to fight gender-based violence in the workplace, to improve the ability of maquila (sweatshop) workers to defend their rights through education and training, and to build worker’s skills in mediation, negotiation, and conflict resolution.

MEC provides training, advocacy, and legal support to women in the municipalities of Managua, Ciudad Sandino and Tipitapa. They work with women workers in Nicaragua’s free trade zones, home workers and small-scale farmers.

The project will raise awareness in Canada about the situation women are facing in Nicaragua, especially in the free trade zones, and strengthen CUPE’s relationship with these workers.

This project supports ACT’s ongoing work to organize, lobby and advocate for teachers’ and workers’ rights and welfare in the Philippines. The project will increase ACT’s capacity to organize new members, campaign for increased salaries, and address issues of trade union rights including the right to association and collective bargaining, and the full implementation of collective agreements.

ACT will continue campaigning for human rights, especially in Indigenous communities, and to stop government targeting of trade unionists. Social movements, trade unions, media outlets, farmers and Indigenous organizations continue to be the target of Philippines President Rodrigo Duterte’s repressive policies and actions. COVID-19 restrictions have led to an escalation of surveillance, harassment, intimidation, threats and even death to many who criticize the government.

This project supports COURAGE’s organizing efforts toward a national minimum wage and for a law that ends precarious work in the public sector. COURAGE is working to build a broad-based workers’ movement that advances this fight through education and information, lobbying, demonstrations, alliance building and international solidarity.

Like other social movements and unions in the Philippines, COURAGE has been the target of ongoing government violence, harassment, and intimidation.

CUPE stands with workers around the world challenging exploitation, privatization, poverty, austerity, corruption, and war. Collective, coordinated resistance is the only way to achieve justice and dignity.

If your local is interested in supporting the CUPE National Global Justice Fund and our union’s international solidarity work, visit cupe.ca/international-solidarity or contact International Solidarity Officer Kelti Cameron at kcameron@cupe.ca.