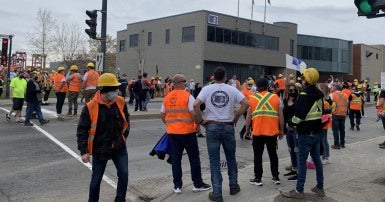 The Canadian Union of Public Employees (CUPE) says it’s a shameful day for Canadians, as lawmakers in Ottawa rubber-stamped Bill C-29, a bill to make it illegal for dockworkers at the Port of Montreal to continue their five-day old strike.

CUPE believes Bill C-29 is unconstitutional, as it infringes fundamental rights protected by the Charter. CUPE is determined to defend these rights by challenging the bill in the courts.

“The Liberals haven’t just failed dockworkers in Montreal, they’ve failed all working people in Canada,” said CUPE National President Mark Hancock. “Prime Minister Trudeau just sent a loud and clear message to every employer in the country: don’t bother bargaining in good faith with your workers, because if things get tough, we’ll be there to bail you out.”

The workers are members of CUPE Local 375, which represents 1,150 dockworkers at the Port of Montreal.

CUPE 375 went on strike April 26 in response to escalating pressure tactics by their employer. The Maritime Employers Association (MEA), which served lockout notice on April 10, announced they would not honour job security provisions in the collective agreement, and extended workers’ shifts by up to 100 minutes.

The MEA walked away from the bargaining table April 27, once it was clear the Trudeau government would give them their wish of legislating their employees back to work.

“We’re grateful to Jagmeet Singh and the NDP for successfully amending this bill to take away some of its worst elements,” said CUPE National Secretary-Treasurer Charles Fleury. “But in the end, this is a dark day for workers’ rights in Canada. Every Liberal and Conservative MP who voted for this should be ashamed.”