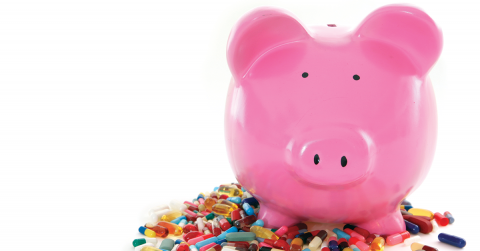 Often we hear that the high cost of pharmaceuticals is making extended health plans unsustainable. Employers will say that too many people are taking drugs that are too expensive. So what is the answer? More restrictions on the plan like managed formularies and increasing the use of generic brands can only go so far in reducing drug costs.

There is a solution, and it lies right at the root of Tommy Douglas’s vision for universal health care in Canada. The answer is a national pharmacare program.

The labour movement has often rallied for changes that improve the lives of everyone, not just for our own members. A national pharmacare plan could be our next great achievement. We can even engage our employers to stand alongside us to make real change for everyone in Canada and save money on their drug plans in the process!

By creating a national pharmacare plan, we could:

Save money. Canada is ranked second in an Organization for Economic Co-operation and Development (OECD) list for drug spending per capita by country. This high ranking is due in part to the fact that we purchase drugs provincially and not nationally. If we purchased nationally we would get a much better bulk buying discount. A study done by the Canadian Centre for Policy Alternatives in 2010 estimated that we could save $10.6 billion annually by instituting a national phamacare plan. That is money employers and provinces could have at their disposal for other projects. Financially it makes good sense!

Make drugs safer. An independent adjudication process that is conducted nationally with more requirements for proper drug trials and research would result in safer prescription drugs.

Research, approvals and prescribing practises are currently influenced by pharmaceutical companies. A strong national program would reduce this influence.

Increase equality. Currently not all Canadians have equal access to affordable pharmaceutical care when they need it. That’s not right, and a national pharmacare program can help.

The idea of a national pharmacare program isn’t new, but there has been real political apathy in Canada that makes big change difficult. A change like this is sensible. It could result in real cost savings for our employers and meaningful help for both our members and Canadian society as a whole. If this government won’t do what is right and sensible, we should consider electing one that will.