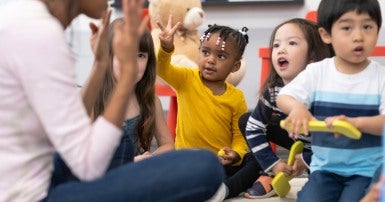 Nearly all provinces and territories have signed on to new child care and early learning funding from the federal government, bringing the possibility of a national child care system closer to reality. Ontario, the only province that has not yet signed an agreement, is expected to do so in the coming days.

This increase in funding is a hard-fought win. The existing bilateral agreements commit to reducing child care fees to an average of $10 per day, expanding the number of available child care spaces, and increasing wages to recruit and retain qualified early childhood educators.

However, not all the agreements maximize support for a universally accessible and publicly delivered child care system.

Prince Edward Island and Alberta have announced that licensed for-profit centres will be eligible for the new funding, although PEI’s agreement promises to develop a strategy for expanding non-profit and public child care programs.

Other provinces have taken more concrete steps toward building an accessible, affordable, and inclusive child care system. British Columbia has announced it will limit funding eligibility to public and non-profit child care centres and Indigenous governments. Similarly, Nova Scotia will limit funding to non-profit service providers who reduce their fees and join a province-wide compensation framework for early childhood educators. For-profit operators can access this funding if they abide by the same provincially set rules as not-for-profits.

We need quality, affordable child care for all. CUPE, the Ontario Coalition for Better Child Care (OCBCC), and the Association of Early Childhood Educators of Ontario (AECEO) call on Ontario Premier Doug Ford to immediately sign a bilateral child care agreement which includes a moratorium on the expansion of for-profit care.