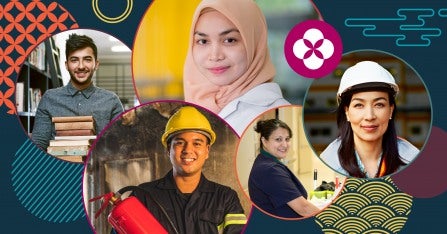 Asian Heritage Month has been celebrated across Canada since the 1990s. It was officially recognized by the federal government in May 2002. CUPE recognizes and celebrates the contributions that members of Asian communities have made to Canada.

Some of those struggles included resistance against the Chinese Exclusion Act and the Head Tax; the denial of the right to vote or to run for public office; the exploitation of Chinese railway workers; the internment of Japanese Canadians during the Second World War; and the Komagata Maru incident which led to challenges to the federal government’s racist “continuous journey regulation” policy. These struggles are historical, but anti-Asian racism is still present today.

COVID-19 has amplified anti-Asian racism. The current pandemic has been made worse by xenophobia, increased feelings of isolation, exclusion, and hate.   Asian communities have reported an increase in racism and discrimination since the beginning of the pandemic. These experiences are also layered with misogyny and sexism. According to data analyzed by the grassroots Asian community group project1907.org and the Chinese Canadian National Council Toronto Chapter (CCNCTO), women have been most impacted by the spike in anti-Asian racism in Canada, reporting 64 per cent of incidents.

These unwelcomed and unwanted acts of violence need to stop.

For Asian Heritage Month, CUPE reminds members that we are here to support you through any experience of racism in your workplace, union, and community. CUPE encourages members to act against racism, xenophobia, misogyny, sexism, ableism, and all forms of discrimination and oppression today, tomorrow, and always.