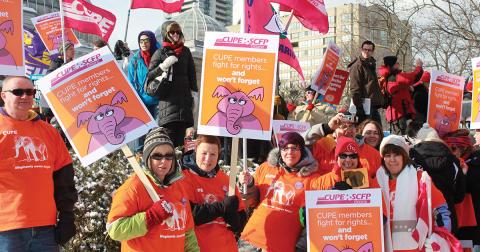 CUPE is part of a legal challenge to Ontario’s Bill 115. The now repealed law was used by the provincial Liberal government to terminate collective bargaining, impose contract terms and prohibit strikes in the education sector, affecting some 55,000 CUPE members. In this fight, and beyond, CUPE will continue to stand up to any government that disregards workers’ fundamental rights.

CUPE is also part of a significant case that the Supreme Court of Canada will hear in 2014, challenging the Saskatchewan government’s unjust essential services law. The law gives the government the power to unilaterally declare large sections of the public service “essential”, denying these workers the right to strike. The court will decide if the right to strike is protected by the Charter of Rights and Freedoms.