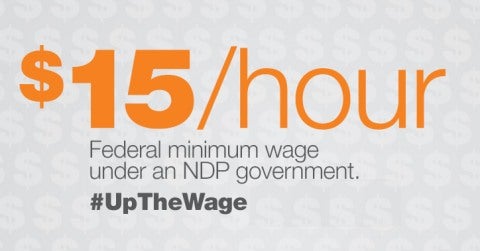 The federal NDP is pushing for the federal government to re-instate its minimum wage at $12/hour and to increase it to $15/hour within four years.

Canada hasn’t had a federal minimum wage since 1996 when it was eliminated by the Liberal government of Jean Chretien. Since then, federally regulated workers in the transportation, financial, telecommunications and broadcasting sectors have been subject to whatever minimum wage legislation applies in the province they are employed in. This shift has meant the federal government no longer plays a role in increasing living standards by raising minimum wages. The average minimum wage across Canada is now lower in real dollar terms than it was in 1975—forty years ago!

The NDP’s proposal would bring back federal leadership in raising wages through the minimum wage. The motion to increase the minimum wage was put forward by the federal NDP Labour critic and former CUPE communications representative Alexandre Boulerice.