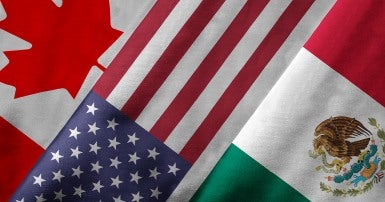 As the Liberal government prepares to negotiate changes to the North American Free Trade Agreement, CUPE is calling for a deal that protects workers, public services and the environment in all three countries.

NAFTA is a deeply flawed agreement but this renegotiation is an opportunity to make it better. CUPE’s submission to the Government of Canada calls for any changes to be guided by principles that build continental cooperation and solidarity.

To uphold these principles, Canada must negotiate the end of NAFTA’s corporate rights rules, known as Chapter 11. This system gives corporations sweeping new powers that reach beyond our public court system. Under these rules, Canada has become the most-sued country in the developed world.

The submission is guided by our National Executive Board’s resolution on NAFTA, passed in June 2017.

Our submission highlights the false promises of the current model of international trade and investment agreements. Since 1994, Canada has lost 800,000 manufacturing jobs, and the myth that Mexico is “stealing” jobs in North America has grown. However, wages in Mexico are still a fraction of the wages in Canada and the United States, labour and human rights violations are rampant, and unemployment is still incredibly high.

Furthermore, the investor protections currently contained within NAFTA have also had a major impact on Canadian democracy. Chapter 11 in NAFTA allows investors to sue Canada if they feel that regulations enacted by democratically-elected governments affect their investments. And these cases, rather than being heard by Canadian judges, are ruled on by secretive tribunals of international trade lawyers.

NAFTA also has far-reaching impacts on the hydro and culture sectors – sectors where many CUPE members work – which is why we’re keeping a close eye on negotiations as they begin next week in Washington.

CUPE is calling on the Canadian government to “fundamentally remake NAFTA,” concluding that “It is still possible to create a new model of alternative trade and cooperation that works for all of North America, that does not encourage investors to sue governments, that protects public services, that respects human rights, and that raises living conditions in all three countries.”

Submission to the Government of Canada on NAFTA renegotiations