The mobilization continues with surprise visits to offices of elected officials 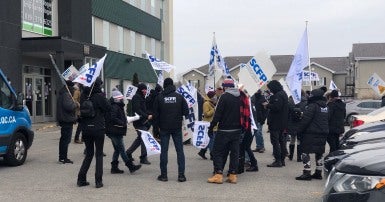 On Thursday, the Conseil provincial des affaires sociales (CPAS) paid a surprise visit to the office of Sonia Lebel, President of Conseil du trésor in Trois-Rivières, to pressure the government into expanding its financial framework at the bargaining table in the public sector. This visit was the fifth one to the riding offices of five elected officials in three days.

“The government announced that it would be investing $14 billion in infrastructure for the economic recovery. It makes no sense for the government not to agree to invest a little more in social infrastructure and in the men and women who work hard to keep the health care, social services and education sectors going,” declared Fréderic Brisson, President of CPAS.

The members refuse to be the victims of an attempt by government to rebalance its budget at their expense. Even prior to the pandemic, these sectors were plagued by severe labour shortages, as their working conditions were simply not as attractive on the job market.

“These employees have been on the front lines since the start of this health crisis. It is high time that investments be made in public sector human resources. Their services were needed prior to the pandemic and still are,” said Brisson.

The elected officials who received a visit in the past three days were Jean Boulet, Minister of Labour, Jean-François Roberge, Minister of Education, Christian Dubé, the Minister of Health and Social Services and, of course, François Legault, the Premier of Québec.