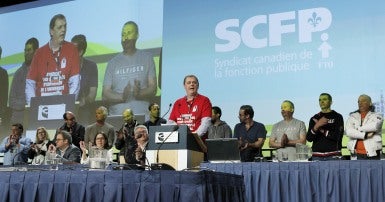 The 18 building systems technicians and stationary engineers at the Université de Montréal received a groundswell of support from delegates to the CUPE-Quebec convention in Quebec City this week.

The striking workers, who were in Quebec City yesterday, received a rousing ovation for their determination in standing up to an employer which has resorted to questionable practices. These members will receive a substantial financial contribution thanks to the solidarity of the 155 locals participating in the convention and the unwavering support of CUPE National.

“To the Université de Montréal strikers, we want you to know that our national strike fund will reach the $100 million mark for the first time in history. Locals all over the country know that CUPE National will be there when they need support,” declared Charles Fleury, the CUPE National Secretary-Treasurer.

Eighteen specialized tradespersons have been without a collective agreement since April 2015 and on strike since March 14. The main stumbling block to a deal is the university’s insistence on using private sector subcontractors to keep the machinery in good working order, particularly at the new MIL campus in Outremont.