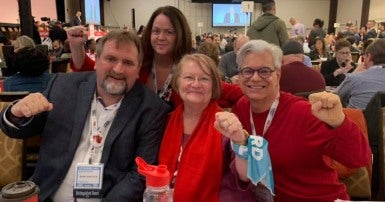 CUPE Ontario is thrilled to announce that Janice Folk-Dawson, Chair of CUPE Ontario’s University Workers’ Coordinating Committee (OUWCC), has been elected as the Executive Vice President of the Ontario Federation of Labour (OFL).

Having served on the CUPE Ontario Executive Board for almost two decades, Janice, who is also the President of CUPE 1334, has a long track record of vigilant labour activism and making gains for working people.

“Janice is going to be a great Executive Vice President of the OFL,” said Fred Hahn, President of CUPE Ontario. “She has been an amazing leader in CUPE Ontario, bringing all parts of our union together and mobilizing to make real gains for the working class. Her commitment to labour will only continue to strengthen and unify our movement.  We are excited and proud to have Janice Folk Dawson fighting for the working class across this province.”

OFL elections for a new executive took place on Tuesday, November 26th at their Power of Many, 15th Biennial Convention at the Sheraton Centre.

“Janice is a feminist with a working class vision of the world because she is a feminist for working class women, we are proud to stand alongside Janice and looking forward to working with this fierce advocate for labour and worker’s rights in Ontario,” added Candace Rennick, Secretary-Treasurer, CUPE Ontario.