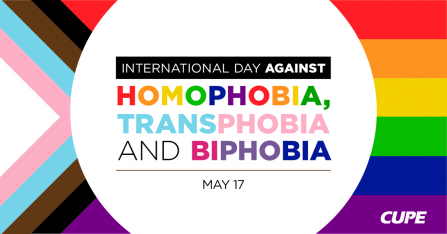 On May 17, the International Day Against Homophobia, Transphobia and Biphobia, CUPE recommits to fighting for safety for 2SLGBTQ+ workers and ending hate in all its forms.

CUPE’s own research shows that even in the absence of overt violence or harassment, heteronormativity (the assumption that everyone is heterosexual) often shows up at work. This bias can be seen in many ways including in casual conversations, employee records, health benefits forms, employer memos, invitations to social functions and so on.

Cisnormativity, the assumption that everyone identifies with the gender designated at birth, also shapes our workplaces. The gender binary of “woman/female” and “man/male” is built into communications, infrastructure like washrooms and changerooms, and other systems. Many trans and non-binary workers also face frequent misgendering and other forms of harassment from co-workers and managers.

But 2SLGBTQ+ workers and our allies fight to make our work and public services safer for all. CUPE members know that homophobia, transphobia and biphobia have no place in our workplaces or communities. Today and every day, CUPE stands with 2SLGBTQ+ workers to end violence, harassment, and discrimination in all their forms.