Ensuring safety and security in all union spaces is not optional 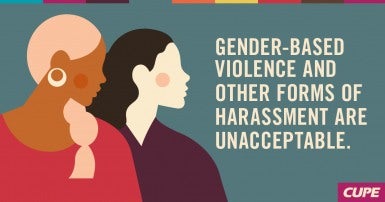 Today, delegates heard about the work that has been done so far by CUPE’s Safe Spaces Working Group. Created by the National Executive Board to address serious concerns about gender-based violence and other forms of harassment and discrimination in our union, the working group – made up of the women members of the NEB – was created to ensure that CUPE has the necessary tools, policies, practices and processes to create safe spaces for all members and at all levels of the union.

The Working Group worked with external consultants to survey and focus group CUPE members on their experiences of gender-based violence, harassment and other forms of discrimination. Over 4,000 members responded to the survey, and many shared experiences of gender-based harassment, violence, and discrimination as CUPE activists. Small focus groups were also held to capture more detailed experiences.

In both the surveys and focus groups, members reported widespread harassment and discrimination, and that those who behave in such ways face no consequences and are not held to account. They also expressed deep reservations about reporting their experiences, noting that people who call out harassment, violence or discrimination within the union are targeted for speaking out.

Coming out of the experiences reported, the Working Group identified a need for more consistent training on gender-based violence and recommended a review of the CUPE Ombudsperson Program, and considering whether adversarial processes like the Trial Procedure are ill-suited for harassment and discrimination complaints.

The Working Group concluded by noting the need to “do better” – to address toxic masculinity within the organization, be transparent and accountable and to do so in all “union spaces” – real and virtual, at the local level, provincial and National levels, and for and with staff, and added that they look forward to collaborating with staff, leadership and members on this critical project to change CUPE’s culture so that it is safe, secure and welcoming for all.