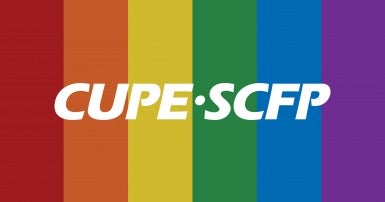 As Pride events take place in communities across the country, CUPE recognizes LGBTQ2+ activists and calls on employers and governments to move forward, not backward.

Like gains of any kind, LGBTQ2+ rights were hard-won by activists, at great cost – they weren’t benevolent gifts from enlightened governments and employers. (LGBTQ2+ is an acronym that describes people who are lesbian, gay, bisexual, trans, queer, two-spirit or who have other marginalized social locations or gender and sexuality identities and expressions.)

This year, the federal government and others are proclaiming 2019 as the 50th anniversary of the decriminalization of homosexuality. However, this only feeds a convenient myth that obscures homophobic and transphobic violence and seeks to co-opt the gay liberation movement. The myth also silences Indigenous, Black, feminist, disability and other activists who fought the 1969 White Paper, unsafe abortions and other “Just Society” violence perpetrated by the Liberal government at that time, much of which still echoes today.

The oppression that divided workers in 1969 continues to divide us now, and we must link our struggles. That is why CUPE is proud to support the Anti-69 network of activists and scholars who are exposing the criminalization, violence and discrimination that continued after ’69 and has deadly consequences still today. Check out @Anti69ers on Twitter for upcoming events, and learn more here and here.

Homophobic and transphobic harassment, violence and discrimination in 2019 continue to hurt our members and the people we serve. CUPE LGBTQ2+ activists, on our National Pink Triangle Committee and in groups at the provincial and local levels, continue the long tradition of organizing for safer spaces and justice around gender and sexual diversity.

CUPE is taking action by:

Given recent setbacks in Canada and the US, we need to ramp up organizing and link our struggles. On LGBTQ2+ rights alone, we are witnessing provincial governments reverse progress on curriculum and Gay-Straight Alliances. The federal government used omnibus legislation to sneak through new barriers to LGBTQ2+ refugees, trying to distract us with a shiny commemorative coin and other pre-election one-offs. Hate crimes are on the rise here and abroad, and LGBTQ2+ folks who are also marginalized by colonialism, white supremacy, ableism and misogyny face the worst.

In defiance of the ’69 myth and all of the myths around human rights (including the false framing of so-called “identity politics” that divides workers), we encourage all locals to support Pride events and in particular precarious workers, migrants, Black, Indigenous, Muslim, trans, nonbinary and other marginalized folks within the LGBTQ2+ community.

Our struggles are connected, and everything worth defending comes from there.