CUPE congratulates Jagmeet Singh and the NDP for their inspiring campaign 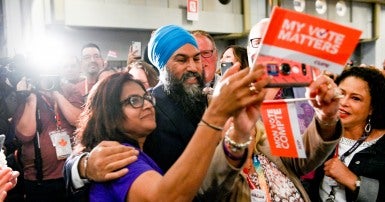 CUPE congratulates Jagmeet Singh and the NDP for their inspiring campaign. Canadians will be well served with that strong team holding the balance of power and keeping the Liberals on their toes.

CUPE will work with the NDP to make the sure that the new government respects its promises to Canadians. Justin Trudeau will have to translate his campaign commitments into meaningful actions to fight climate change, to create a public and universal pharmacare program, and to make life more affordable for Canadian families.

CUPE and the NDP will also work together to push the government to act to increase tax fairness and to strengthen public services.

We want to thank the CUPE members and staff who ran as candidates or volunteered during this election campaign. Their contribution to democracy and their defense of our progressive values are deeply appreciated.