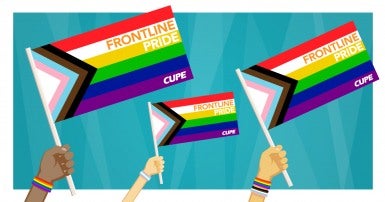 For Pride 2020, CUPE calls on employers and governments to end conversion practices, build safer spaces, and support LGBTQ2+ grassroots groups dealing with Covid-19. We celebrate the resilience and activism of our LGBTQ2+ members and allies.

Check out and make use of our digital Pride 2020 artwork: Facebook banner, online shareables, colouring page, and video conference backdrop.

CUPE represents frontline workers whose critical role is clearer now more than ever. LGBTQ2+ members are in every section of that frontline; their dedication and resilience likewise shine. Together, as LGBTQ2+ activists and allies, we will demonstrate Frontline Pride in our fight to dismantle the homophobic, transphobic, white supremacist, colonial and ableist systems thrown into stark relief by this pandemic.

CUPE is using the Progress Pride Flag to highlight how racism, transphobia and homophobia operate together, and how activists at those intersections have led the resistance.

Two racialized trans women, Marsha Johnson and Sylvia Rivera, led the Stonewall Riots 51 years ago – and Black, Indigenous and racialized LGBTQ2+ activists have spearheaded the most radical cross-movement struggles since that time, around the globe.

Pride is political. Employers and governments try to co-opt Pride, but CUPE is part of the loud chorus for Queer Liberation, Not Rainbow Capitalism – a call that is made only more urgent by COVID-19.

CUPE National is proud to sponsor a series of online talks by LGBTQ2+ leaders from around the globe, presented by Dignity Network Canada and Fierté Canada Pride. The first of these online panels will be:

LGBTQ2+ leaders will discuss the impact of Covid-19 on human rights movements in their regions, and how communities are organizing for justice. Hate crimes are on the rise here and abroad. Harassment and discrimination in housing, employment and other areas have worsened. LGBTQ2+ people who are low income, racialized, Indigenous, Black, living with disabilities, trans and non-binary are most affected.

CUPE is also adding its voice to the LGBTQ2+ movement’s campaign to end conversion practices (commonly called “therapy”): treatments, services and actions that aim to change, repress or discourage a person’s sexual orientation, gender identity or gender expression. These practices cause severe harm, including stress, depression, PTSD and suicide. Tens of thousands are subjected to this violence in Canada still today, and it must stop.

CUPE National has endorsed a call from survivor groups for legislative changes to end conversion practices, and we will press the federal government to pass an improved Bill C-8 into law. Similar campaigns are underway at the municipal and provincial levels; we urge locals to get involved, and if you’re engaged already, please let us know at humanrights@cupe.ca.

Here are ways you can show your own Frontline Pride: