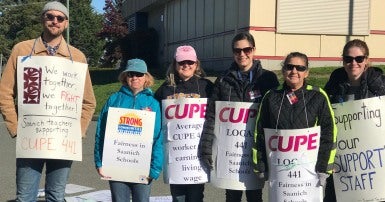 CUPE 441, which represents education workers in Saanich, BC, is calling on the school district to return to the bargaining table.

“I am disappointed that we did not hear back from the District after our offer to get back to the table on Thursday,” said CUPE 441 President Dean Coates. “Our bargaining team was available, ready, and able to bargain all weekend, but the District did not respond.”

The CUPE 441 bargaining committee has developed a document highlighting their concerns with the employer’s offer that is available online at 441.cupe.ca.

“Our members want to get back to classes to support our students,” said Coates. “The whole community understands the importance of wage parity and we need the employer to find a way to make this work. We need to end this strike and get students back in class.”