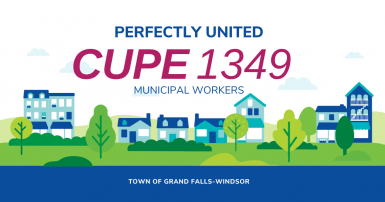 Members of CUPE 1349 voted yesterday in favour of ratifying a new collective agreement with the Town of Grand Falls-Windsor, Newfoundland.

The collective agreement is effective retroactively from January 2, 2021, to December 31, 2025. The deal includes wage increases, a signing bonus, as well as improvements to call-in language that will allow greater work-life balance for casual workers.

The union proposed a new “rate stabilization fund” that will ensure accountability, affordability, and transparency for the health benefits plan, which the town agreed to. “We think this shows our members’ willingness to take shared responsibility of the benefits plan,” says CUPE National Representative Ed White. The town will be the administrators of the fund, with oversight by the union.

The collective agreement must also be ratified by the employer and once that is complete the members of CUPE 1349 will resume their jobs. “We’ll be working with the employer to see that the ‘return to work’ agreement is implemented to ensure a period of healing and respectful return to work, for both union and non-union staff,” says CUPE 1349 President Tammie Greening.

“We believe this is a fair deal for our members, the town, and residents,” says Greening, who thanked the bargaining committee for their hard work and praised members for their support and solidarity.