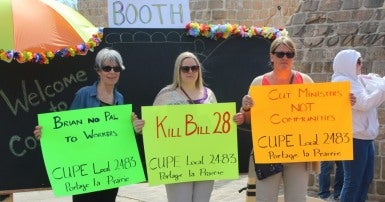 CUPE and other unions, through the Manitoba Federation of Labour’s Partnership to Defend Public Services, brought Pallister’s government to court, and won.

“Brian Pallister has been pushing ideological cuts to public services and attempted to do so by violating our constitutional right to bargain collective agreements,” said Abe Araya, President of CUPE Manitoba. “Pallister lost in court today, but the fight against his austerity agenda isn’t over.”

CUPE provided testimony during the proceedings.

Now that the PSSA has been proven unconstitutional in court, CUPE intends to move swiftly to get to the bargaining table with the intent to negotiate fair deals for the thousands of Manitoba workers, including in health care, education, crown corporations, child care, social services, and more who have been without a contract for over four years.

“Manitoba’s public sector workforce has been on the frontlines fighting COVID-19, and now we are asking Manitobans to support us as we get back to the negotiating table,” says Araya.

“CUPE has very straight forward demands: we want a fair deal for workers. But Pallister has made it clear that he is willing to violate constitutional rights to push workers down, and that’s something we, and the courts, won’t accept.”