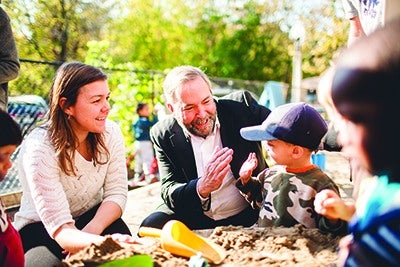 This is the third edition of our quarterly column where we look at the bright spots in Canada’s Parliament during an often bleak Conservative majority.

In September two major announcements from the New Democrats changed the channel back to workers and their families.

The first was a commitment by the NDP to deliver a national child care program based on Quebec’s $7-a-day model. The successful program in Quebec has not only created affordable and regulated child care spaces for families, but it has also paid for itself (and then some) in tax revenue generated to both the provincial and federal government. As we enter an election year, it’s critical that Canadians have a clear proposal put forward to fix the child care crunch facing families from every corner of the country.

Next, the NDP announced the introduction of a $15 federal minimum wage proposal. This would apply to more than one million workers in federally regulated sectors such as transportation, financial services, telecommunications and broadcasting, and other federal employees. Although the minimum wage is set province by province for all other sectors, a federal minimum wage would set a national standard and place pressure on provinces to raise theirs.

In the last session of Parliament, Stephen Harper launched a major attack on working people by introducing Bills C-377 and C-525.

Bill C-377 creates a new and onerous requirement for financial disclosure that will only apply to unions - no other similar orga­nizations. C-525 will make it harder for workers to form a union, but easier to dissolve one. Opposition MPs put up a strong fight in the House of Commons where we secured a series of important amendments to C-525. In the case of C-377 Harper used his majority to ram it through without amendments, but the opposition continued in the Senate and lead to a number of Conservative Senators joining up with their Liberal counterparts to reject it. It was then sent back to the House of Commons with a number of major amendments.

Unfortunately C-377 was reset when the government prorogued parliament and C-525 has also made its way back through the House and onto the Senate, where it has joined C-377, now back in its original unconstitutional form. The fight continues on both fronts.