We will keep fighting for a Canada where ALL workers have a decent wage, retirement security, dignity and a safe workplace.

As the new century started, Canada was making gains in social equality but sliding backwards on economic equality.

CUPE’s leadership is committed to the union as an agent of social change - a direction reinforced when Paul Moist was elected president in 2003. He worked closely with Claude Généreux, who was elected national secretary-treasurer in 2001. Together they oversaw unprecedented growth in the national strike fund and solidified the unions’ finances.

In 2007, the National Women’s Task Force released survey results on status of women in CUPE, which provided valuable insight into the barriers facing women members.

Our work in literacy gained national recognition and in 2012 CUPE launched a flagship economic literacy project.

Over the past decade, CUPE resisted contracting out and privatization in all sectors including utilities, universities, libraries, waste disposal and health care.

We stood up to corporate greed and responded to direct attacks on our collective bargaining rights.

Together we’ve fought for better pensions and retirement security, to protect and strengthen healthcare, and to stop plans to dismantle Employment Insurance.

Our voice cannot be misheard or mistaken in our work to protect and strengthen healthcare, in fighting privatization and commercialization of our water and defending water as a human right, and in our campaign for better pensions and retirement security, while Stephen Harper promoted his plan to dismantle Employment Insurance.

Across the country, right wing politicians followed Harper’s lead and talked about importing laws from the U.S. that strip workers and unions of their most basic rights.

To help prepare, CUPE delegates at the 2011 national convention elected Charles Fleury secretary-treasurer. Overseeing the creation of a permanent Fight Back Fund, he ensures CUPE members have the resources needed for the fight ahead. 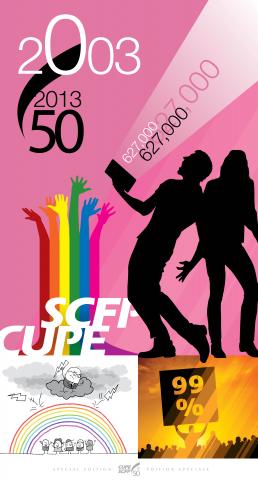