“We have given Nipissing and Parry Sound CAS the tools it needs to end the lockout”: CUPE 2049 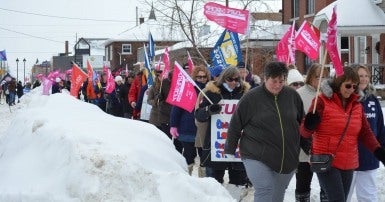 Workers at the Children’s Aid Society (CAS) of the District of Nipissing and Parry Sound were locked out of their jobs on December 23, following their attempts to negotiate a collective agreement that defends high-quality child protections services in the north.

The lockout will reach its 12-week mark on March 17. In February, representatives of the Canadian Union of Public Employees (CUPE) requested a meeting with the CAS’s board of directors, in order to provide workers’ perspective on the labour dispute. The request was made in the context of the board’s decision to suspend public meetings for the duration of the lockout.

The board invited the union’s bargaining committee to make a presentation in a closed meeting Tuesday afternoon (March 14). In response to a media release distributed by the board of Nipissing and Parry Sound CAS, Debbie Hill, president of CUPE 2049, issued the following statement:

In requesting a meeting with the board of directors for Nipissing and Parry Sound CAS, the union’s primary goal was to ensure that board members had the clearest possible picture of the background to the lockout, the issues currently on the table, and the harmful effect that this lockout has had on vulnerable families and children in the region.

At Tuesday’s meeting with the board, CUPE 2049 gave a detailed presentation and left behind documentation of services issues for board members to contemplate.

Following the meeting, members of CUPE 2049’s bargaining committee were left with mixed emotions. We are no closer to a deal, yet board members can no longer be in doubt about what led to this lockout or about the changes and compromises that CUPE has made in its bargaining position since the lockout began 13 weeks ago.

As we made clear at last night’s meeting, we have given Nipissing and Parry Sound CAS the tools it needs to end the lockout. At the last bargaining session, CUPE offered a package of modest, sensible and practical proposals, including a solution to the society’s concerns around sick leave.

We are encouraged by the expressions of goodwill from CAS board president John Stopper and executive director Gisèle Hébert, but we don’t have to remind them that actions speak louder than words. We must get back to the bargaining table to negotiate a deal that ends the lockout.

That’s just one reason we’re pleased that Mr. Stopper has committed his attendance at future negotiations between the society and the union. One of the union’s abiding concerns in this dispute has been the unilateral approach to bargaining taken by the executive director; to have the board’s involvement in negotiations will increase the chances of ending the lockout and reaching a deal that ensures workers can keep children safe in their communities.