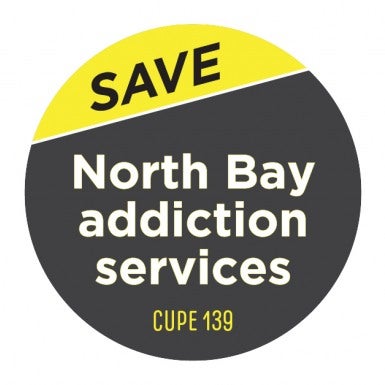 The poll, conducted earlier this week, was released today by CUPE. In mid-December, the union alerted the community to the elimination of the only in-hospital residential addiction treatment program in the area. The beds and service cuts are slated to take effect this coming June.

CUPE’s Ontario Council of Hospital Unions (OCHU) President Michael Hurley, says the poll “suggests that many in the North Bay community believe that access to residential treatment is a key element in helping people who have chosen the hard road to recovery from addiction. They do not support the closure of the hospital program.”

Since CUPE raised concerns about the hospital addiction treatment program cuts, the number of reported drug overdoses and deaths has gone up in the area. North Bay Parry Sound District Public Health Unit data shows that between May 2019 and the beginning of January 2020, there were 154 reported drug overdoses. Eight of them have resulted in deaths.

Only about 17.5 per cent of those polled said they think cutting the 29-bed around-the-clock hospital addiction treatment program and two in-hospital crisis beds, and replacing them with a 6-bed residential program in the community is a good idea. Area MPP Vic Fedeli is defending cutting the hospital residential addictions treatment beds and program in favour of community-based programs. When those polled were asked whether they agree with Mr. Fedeli, 65 per cent of them said, no.

“There are many North Bay families struggling with addiction. It is misleading to make this a debate about community services versus an in-hospital residential program. It helps no one to cut a hospital treatment program and channel a small part of the money to a few community-based services,” Hurley says. “The discussion should be, ‘how do we increase access to treatment and keep the hospital program open?’”

According to the Ontario Hospital Association, emergency departments at the province’s hospitals are busier than ever, with a higher number of people waiting for in-patient beds. Ontario’s readmission rates are also higher than in other provinces. “There is a trickle-down effect of closing the crisis addiction treatment services. Without the in-hospital crisis bed option, there will be an influx of patients at the hospital’s emergency department,” says Hurley.

CUPE hopes that Cabinet Minister Fedeli will use his considerable influence to push his government for funding in the coming 2020 provincial budget to keep the NBRHC residential addiction treatment program open.