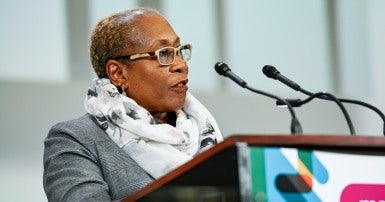 Toronto-based activist Veriline Howe, an inspirational leader for racialized women both inside the labour movement and in the community, is this year’s recipient of the Ed Blackman Award.

The award, established in 2013, recognizes outstanding leadership in pursuit of racial justice and diversity inside the labour movement.

A voice for equality, diversity and inclusion, Sister Howe has served as CUPE 2191’s Vice-President for the past six years and on CUPE Ontario’s executive board for the past decade. In accepting the award, she pledged to ensure that there “would be a space” on the award for those have traditionally been voiceless.

In addition to her work with her local union and with CUPE Ontario, Howe has spent more than two decades mentoring black and other racialized members in their struggles against precarity, discrimination and racism.