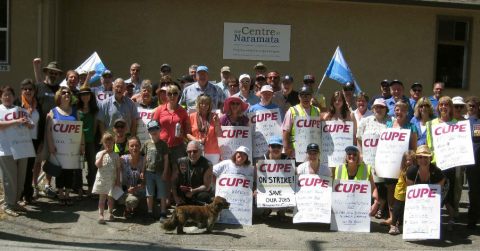 CUPE 608 President Brianne Hillson talked about how important the support of CUPE and other unions was to the small group of striking workers at the United Church Naramata Centre at a rally for the workers in late May.

Paul Faoro, CUPE BC Secretary-Treasurer, pledged support to the striking CUPE members who he said were dealing with the effects of very poor management combined with a financially struggling facility. Faoro suggested that the Naramata Centre Board of Directors consider contracting out management rather than its front line workers.

CUPE 608 members at the United Church Naramata Centre provide a wide range of services to keep the guest accommodation facility running year-round. The 30 unionized employees began a full strike on May 15.