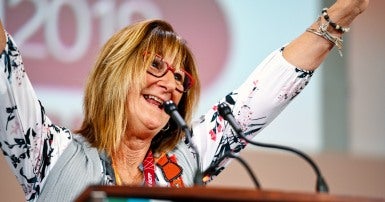 CUPE 1867 activist Sharon Hubley, one of few women in her workplace of 1,000 highway workers in Nova Scotia, is this year’s recipient of the Grace Hartman Award. CUPE National President Mark Hancock, saying the award “shines a light on feminist leaders in our union,” paid tribute to Hubley for the many barriers she has broken over the last 25 years.

“I was very naïve at first and very quiet,” Hubley told delegates. “But as I heard comment after comment aimed at me and the other women in the workplace about our clothes, our bodies, I couldn’t just sit back and take it.”

When her daughter was born, she said, she started finding her voice and it became stronger through the union. She then took CUPE workshops and realized that others had the same issues in their workplaces. The more stories she heard, the bolder she became.

“Speak up on bias against women. Speak up for our missing and murdered sisters. Speak up on gender equality, for the marginalized, for violence in the workplace, for health and safety, and for diversity and inclusion,” Hubley told the cheering crowd.