School support staff given no consideration in reopening plans 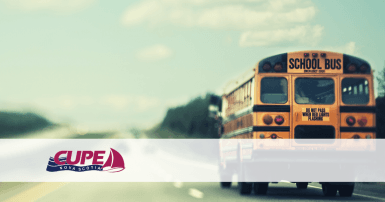 The union representing school support staff at all Regional Centres for Education and the Conseil scolaire acadien provincial is calling on Nova Scotia Premier Iain Rankin to listen to the educational support staff who do the actual work of maintaining schools and keeping students safe.

“We should be given the same consideration as students when it comes to safety,” says Lisa deMolitor, chair of the Nova Scotia School Board Council of Unions. “When a school is shut down due to an active case, at a minimum, all school staff should be directed to work from home, for the same amount of time that students are out of the school. This would help to reduce the risk of exposure to education workers, particularly where there is still community spread.”

“What the Premier and Dr. Strang might not understand is that when the schools were closed two weeks ago, our members engaged in a process to close down facilities and equipment for the remainder of the year,” says deMolitor. “The sudden reopening of school has caused hardships for our members.”

“For example, some buses had been put out of service for summer maintenance and refitting, some staff had been granted vacation that had to be cancelled, and spare support staff had no guarantee of work. Some bathrooms were torn out, cafeterias broken down, and floors were stripped,” says deMolitor.

“Counting on the income they receive from call-in shifts, many ‘spares’ looked for other jobs because they thought they were not going to be called back for the rest of the school year. That has caused difficulties finding spares who are available and could be called in to work,” says deMolitor.

“Had there been more consultation, or at least more advance notice of the decision to reopen schools, we would not have been scrambling since last week to put things back together. We are dismayed that government did not take into consideration how this would impact our members.”

“Since the Province reopened schools, all those things needed to be put back in place. However, much of it has only been put back in sort of a bare minimum, skeleton fashion. Not all the facilities are readily accessible. That means, for example, not all bathrooms are currently open,” says deMolitor.

“Our members have done the best they can under the circumstances,” says CUPE Nova Scotia President Nan McFadgen. “The full number of active cases is not communicated to us. Only the initial case is communicated, and rarely the subsequent related cases.”