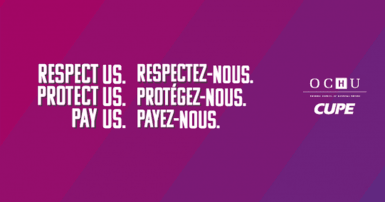 What began as seething frustration over a PC government pre-pandemic wage cap law (Bill 124), is now full-blown outrage among Ontario hospital staff who have endured among the highest COVID-19 workforce infection and burnout rates in the world.

Just weeks before June’s provincial election Ontario’s predominantly female dominated hospital labour force are asking voters to back them and their call for the PCs to repeal Bill 124 which is keeping wages 6 per cent below inflation and fueling a mass exodus of hospital staff, particularly nurses.

Tuesday’s protest at the Civic Campus of The Ottawa Hospital (TOH) that included front-line nurses and other hospital staff represented by the Canadian Union of Public Employees (CUPE) Ontario Nurses’ Association (ONA) and Ontario Public Service Employees Union (OPSEU), was the first of six regional demonstrations taking place into next month, including at the Hospital for Sick Children in Toronto on May 5.

Bill 124, “has cut the real wages of health care workers by 10 per cent over the last two years,” says Sharon Richer secretary-treasurer of CUPE’s Ontario Council of Hospital Unions (OCHU-CUPE). “When you layer that wage cut on top of failing to provide proper personal protective equipment during the pandemic and the back-breaking workloads that come from working in a hospital system with the fewest staff of any developed economy, many people are just giving up. It isn’t lost on them that you never see this kind of exploitation of male dominated first responders, like police or firefighters.”

Vacancies in Ontario hospitals are soaring as Bill 124 artificially supresses the wages for hundreds of thousands of women in the health care “who have worked their hearts out for Ontarians throughout the pandemic,” adds Richer.

Lou Burri president of CUPE 4000 which represents about 4000 front-line staff at TOH, says his members are “outraged that their senior hospital administrator has not come out and asked the provincial government to kill this wage cut legislation.  Mr. Love knows how detrimental  the impact of Bill 124 has been on hospital staff morale who’ve delivered great care to our patients throughout a global crisis. They watch management get wage increases and are, frankly, appalled at their silence and disrespect. Our CEO must be on the side of the front-line staff, not a bad Bill.”

In addition to the Ottawa and Toronto protests, hospital workers will rally in Sudbury, Oshawa, Hamilton and again in Ottawa, this time in front the Bruyere hospital.

With these protests hospital workers are saying ‘enough of the disrespect. Some others are taking another form of protest, they are leaving their jobs altogether. It’s time this government take responsibility for the staffing crisis that’s unfolding before our eyes start to retain this valuable workforce by scrapping Bill 124,” says Richer.