Premier Higgs insists on concessions instead of offering fair wages 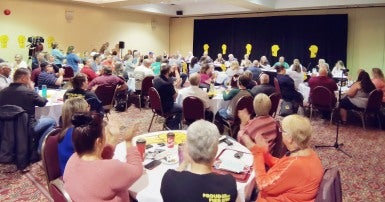 Friday Morning, the CUPE Centralized Bargaining Team in New Brunswick held a press conference to denounce the relentless concession demands of the Premier through the NB Treasury Board in centralized bargaining sessions.

At 11:30 today, Government left the bargaining table, having refused to respond to CUPE’s last pass on Thursday night. “They were not interested in bargaining unless the union accepted concessions,” said CUPE NB President Stephen Drost.

“No real movement happened on a general economic increase for workers,” Said Drost. “The Premier said bargaining is “give and take,” but all he wants at the table is to take, take and take. He never moved from his initial offer, as the moves he made were coupled with significant concessions demands instead of talking about a general wage increase.”

During the conference, leaders of the CUPE Centralized Bargaining team shared their experience of this unique centralized bargaining.

“We were ready to move on our initial general economic wage proposal if the employer was ready to move on theirs, but they clearly were not respectful when they presented the very same wage restraint mandate demanded at every bargaining table years ago. Other public sector workers already massively rejected a similar demand. Why would the Premier think our members would accept a bad deal?” said Norma Robinson, President of CUPE 1252, the NB Council of Healthcare Unions.

“We told the negotiators just how the members of our locals are frustrated and angry by the stalling and concessions demanded by the Premier’s negotiators,” said Iris Lloyd, President of CUPE 1253, representing school district custodians, trade workers and school bus drivers.

“I am so disappointed to see how the premier preferred to waste an amazing opportunity to fix - at one centralized table - the major recruitment and retention issues in public service through a fair general economic increase for workers,” said Steve Drost.

Province-wide strike votes will begin on Tuesday, September 7th. Votes in the healthcare sector and francophone community colleges will be held later in the month.

“The door is never closed if Higgs wants to improve real wages for workers through a general economic increase, not concessions,” concluded Steve Drost.