The Port of Montreal is closed, but negotiations continue 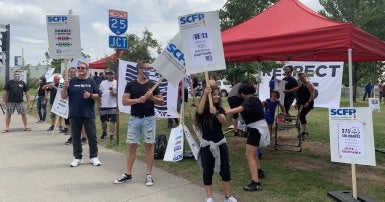 In spite of sustained efforts by the Syndicat des débardeurs du port de Montréal (CUPE 375) to reach an agreement, the union had no other alternative but to uphold its notice of an unlimited general strike.

“The port is closed because the MEA changed the salary conditions of our members on Thursday, August 5, 2020 at 3 p.m. and because we noted that a technical lockout had been in place since Monday, August 3 when several ships had been diverted to other ports, including Halifax, New York and St. John, New Brunswick, which took work away from our members and made normal operations impossible at the Port of Montreal.”

“We issued a strike notice on Friday to restore balance in our discussions, while at the same time offering a truce to open the port and have the parties focus on negotiating a collective agreement,” explained Michel Murray, the CUPE union representative.

“The MEA, the shipping companies and shipping lines are the only entities responsible for closing the port and keeping it closed. The union will continue negotiations before a mediator and will keep the channel of communications open between the parties to achieve a possible truce.”

The collective agreement between the union and the MEA expired on December 31, 2018. Talks broke down mainly over scheduling, particularly with respect to the work-life balance issue.

The union filed a notice of an unlimited strike last Friday after receiving the support of 99.22% of longshore workers during a secret ballot that ended on Tuesday, August 4, 2020, at which 1031 of the 1151 members of Syndicat des débardeurs du port de Montréal cast a vote.