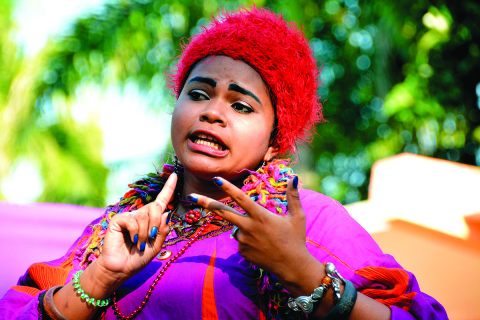 Shouts of joy and celebration rang out at the annual forum held by CUPE partner, MEC (the Maria Elena Cuadra Movement of Employed and Unemployed Women) in Managua, Nicaragua in March. One thousand women, including small delegations from Guatemala, El Salvador and Honduras and hundreds of Nicaraguan maquila (sweatshop) workers were present to officially adopt the Labour Rights Agenda for Women Maquila Workers. The Agenda was two years in the making and involved more than 4,000 Central American maquila workers debating and discussing their priorities and strategies.

The result is a concise and remarkable document that outlines the six priority themes for the maquila workers. Those six include the right to occupational health and safety, the right to sexual and reproduc­tive health and the right to not be subjected to physical violence, sexual harassment or bullying at work. The recommendations were read aloud at the forum, and the women enthusiastically approved the report. Government and labour leaders were invited to officially receive their copy of the Women’s Agenda and to commit to helping fulfill the recommendations. It was a day to recognize achievements, gain political support for the Agenda and celebrate the empowerment of women workers in Central America.

In 1994, when a handful of Nicaraguan women workers and activists decided it was time to organize women in the maquila sector, they were ostracized, threatened and physically assaulted. They approached CoDev who recognized the urgent need to support these women to work in the free trade zones where labour violations were rife. CUPE BC agreed to work with CoDev and formed a partnership with MEC that continues today. CUPE National has been part of this partnership with CUPE BC since 1999. 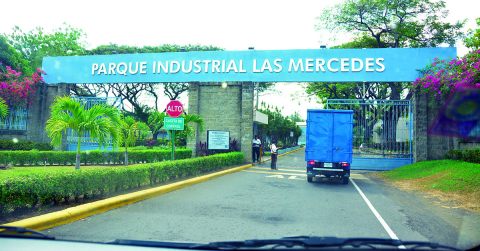 The Canadian delegation also travelled to Honduras to meet with CUPE partner, the Honduran Women’s Collective (CODEMUH) whose main focus is on occupational health and safety rights for maquila workers.

The Confederation for Unity, Recognition and Advancement of Government Employees (COURAGE) is the largest labour confederation in the Philippines with over 200,000 members. They are currently campaigning to expose corruption and oppose privatization. COURAGE continues to push for real public services and for the release of several political prisoners. 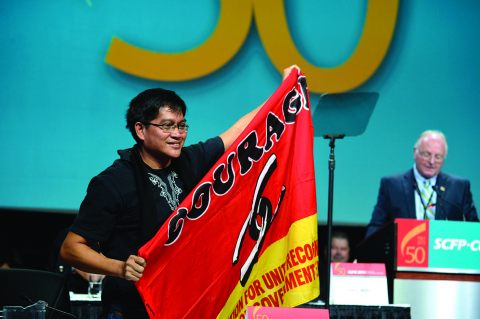 The fact-finding mission was initiated by COURAGE following the politically motivated killing of six of its leaders over the past five years.According to the respected human rights organization Karapatan, there have been 169 victims of extra-judicial killings, 19 cases of enforced disappearances and 570 cases of illegal arrest under the current Aquino government. This includes two COURAGE national organizers, Randy Vegas and Raul Camposano, who have been detained since Dec. 3, 2012.

Counter insurgency programs designed to justify extra judicial killings, disappearances, arbitrary arrests and detention of activists throughout the country have increased. This oppressive military program is designed to suppress legitimate resistance, including the right to organize trade unions and exert workers’ right to collectively organize.

The delegation committed to raising awareness in Canada about the human rights violations public sector workers endure at the hands of the Philippines government. 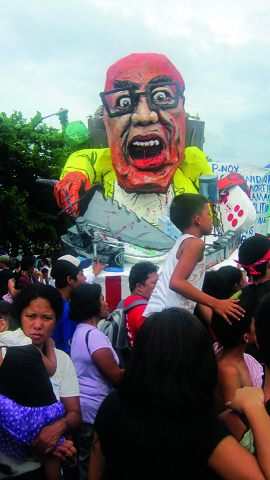 CUPE’s partner in the education sector the Alliance of Concerned Teachers (ACT) has recently won recognition as the sole and exclusive bargaining agent of 60,000 teachers in the National Capital Region of the Philippines. They are now preparing to negotiate their first collective agreement. They are actively campaigning against the imposition of P3s, private school voucher systems, and a desperate lack of resources. ACT continues to advocate on broad political issues including challenging the increasing US military presence in the Philippines and the government proposal to allow 100 per cent foreign ownership of property and land.

Following the democratic reforms of 2010, Myanmar (formerly known as Burma) has allowed many acti­vists and advocacy organizations to enter the country more easily.

CUPE, in partnership with CUSO International and VSO, has been working to support the democracy movement on the Thai-Myanmar border for several years. With the increased freedom of travel, more activities are taking place inside Myanmar and many organizations have already moved their offices into the country. Others maintain their presence outside the country, in Thailand.

While the situation in Myanmar is generally improving in the economic centre Yangon (formerly known as Rangoon), some of these positive changes have not yet reached the ethnic areas, including Kachin State and Arakan State. These areas continue to witness military and ethnic conflict and human rights violations.

International donors have shifted their priorities and have reduced or cancelled funding for organizations on the Thai-Myanmar border under the mistaken impression these organizations are able to operate free from repression inside Myanmar.

CUPE’s global justice project, Building the capacity of human rights defenders from Burma, is now being supported by the Burmese Women’s Union (BWU) located in Thailand, following the decision of our partner VSO to relocate their office inside Myanmar. The BWU works in Thailand to promote the role of women in Myanmar and to increase the contribution of women in the struggle for democracy, human rights and establishment of a genuine democratic federal union. We are grateful for their support to ensure our project in 2013/2014 continues to support organizations working on issues of land rights, women’s role in society and basic rights such as access to education and health care.

This is a time of change in Cuba, as the economy opens to private enterprise. This means that workers are allowed to be “self-employed” in certain sectors, according to a list of 178 “allowed” jobs. Many of these self-employed workers are members of the National Union of Public Administration Workers (SNTAP). Changes to the labour code are on the way, and all unions, including SNTAP, will have to train their workers and leaders on its interpretation. CUPE’s continued support for training facilities and materials remain relevant and valuable in this changing environment.

CoDevelopment Canada is coordi­nating a shipment of office supplies and equipment to SNTAP for their local training classrooms. The project of shipping much-needed goods to SNTAP began in 2012. The project has gone through some difficulties over the years, because the Cuban economy and natural disasters made project purchases difficult. CoDev anticipates that the goods will reach Cuba in the next few months.

CUPE’s global justice project, “Community Work to Defend Public Water” with SINTRACUAVALLE, the water workers union in the Colombian province of Valle de Cauca is supported by CUPE Nova Scotia and CUPE Newfoundland & Labrador and continues to gain strength and momentum. High
levels of violence due to an ongoing civil war affect the region and drug trafficking has led to high rates of unemployment and poverty.

Nearly 95 per cent of the population live below the poverty line, making the public water company a vital service to all community members who would be unable to afford the service otherwise.

SINTRACUAVALLE has decided to focus on two main areas of work: educating their customer base to empower them to take up the anti-privatization struggle and, secondly, building alliances with small community water systems, with workers at the regional environment agency, and with other community leaders. Over the past 12 years, SINTRACUAVALLE has been working to maintain ACUAVALLE as a public company, fighting off five serious privatization attempts. Their fight has meant death threats and harassment of their members.

NOMADESC, with financial support from the CUPE Global Justice Fund and CUPE BC, works to continue to defend the rights of Colombian communities and trade unionists through education, advocacy and mobilization. Delegates to the 2014 CUPE Saskatchewan Convention added their support by passing the hat for donations to NOMADESC that were matched by CUPE Saskatchewan and CUPE National.

NOMADESC is an integral part of human rights work in the southwest region of the country. The organization works directly with indigenous, afro-Colombian and campesino communities as well as unions, women and youth.

NOMADESC continues the impor­tant task of working directly with victims of the conflict to help them gain access to the justice system.