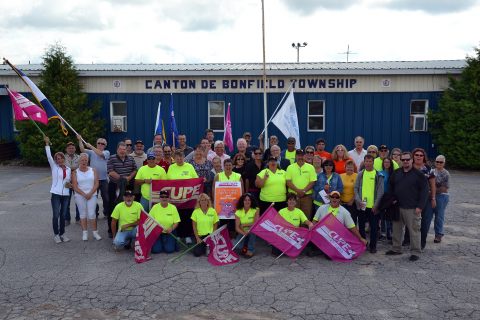 NORTH BAY, Ont. – Following two days of mediated talks convened by a vice-chair of the Ontario Labour Relations Board, the union has ratified a tentative settlement in the 10-month long dispute between the Township of Bonfield and CUPE Local 4616-2.

“We worked really hard to reach a deal that both we and the Township can live with,” said Diane Francoeur, spokesperson for the striking workers. “Ultimately, we were able to push all the major concessions off the table. Equally crucially, the five workers who were terminated by Mayor McLaren during the strike have been reinstated.”

“Our members are so looking forward to getting back to work to service the residents of Bonfield,” said Gail Ashby, co-chair of the strike committee.

CUPE National President Paul Moist, who visited the strikers on their picket line, introduced them to the 5,000 delegates at the Canadian Labour Congress convention in May, and led fundraising efforts for them, hailed their tenacity: “The Bonfield workers who held the line for ten months in this defensive strike have been a source of inspiration for all of CUPE. You have shown us what it means to stand up for your collective agreement, to stand up to a bullying employer, to stand up for public services.”

The Bonfield workers received tremendous support from CUPE locals across the country. “From the beginning, this was a defensive strike,” said Francoeur. “It was a long, hard winter, and the support of those locals was essential to our ability to stay strong for ten months.”