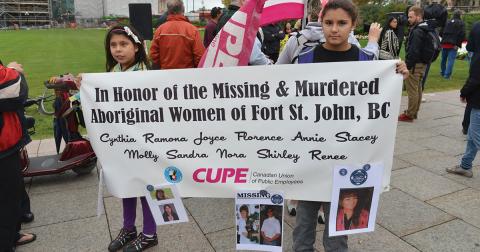 CUPE’s Enough is Enough campaign underscored the stark gap that exists between First Nations and other communities in Canada in accessing safe drinking water. In partnership with the Assembly of First Nations and the Safe Drinking Water Foundation, the campaign supports the right of all Indigenous peoples to defend their water resources. The poster and petition were highlighted at division conventions.

City of Nanaimo workers are working with their neighbours in the Snuneymuxw First Nation on water issues. Through an innovative mentoring program, workers from the First Nation are building their expertise in maintaining water systems by job shadowing CUPE 401 water workers.

On October 4, CUPE stood with the Native Women’s Association of Canada at Sisters In Spirit vigils to remember missing and murdered Aboriginal women and girls, demanding justice and an end to violence. In Manitoba, CUPE and the Opaskwayak Health Authority organized a powerful vigil at the site of the 1974 murder of Helen Betty Osborne in The Pas. CUPE also supported Tears 4 Justice, a cross-country walk to raise awareness about violence against women and children. 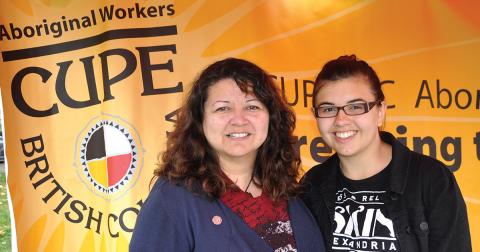 CUPE members across the country are involved in Idle No More, the grassroots movement demanding respect for aboriginal and treaty rights. In January, the CUPE

Manitoba Aboriginal Council was invited to speak at the largest Idle No More demonstration in Winnipeg. Solidarity with the movement continued at national convention, with a resolution supporting the Elsipogtog First Nation anti-fracking protests, and calling for a moratorium on fracking in traditional First Nation territories.

This July, CUPE members again joined the Métis Nation – Saskatchewan for Back to Batoche Days, an annual celebration of Métis culture and history. CUPE National was an event sponsor, and had a booth at the festival.