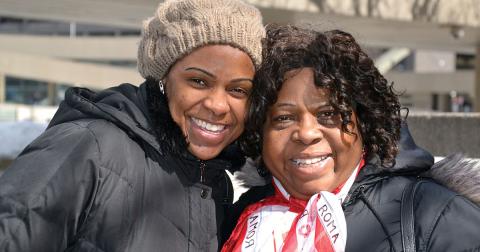 A proud moment in CUPE’s equality work came at this year’s national convention, where delegates voted to establish the Ed Blackman Worker of Colour Award. The award recognizes achievement and activism in ending racism, promoting diversity, and advancing equality and social justice for all racialized people. The late Ed Blackman, former president of CUPE 500 and former general vice-president on the National Executive Board, was a committed trade unionist and a founding member of the CUPE National Rainbow Committee.

In another proud moment, CUPE 3017 member Susan Shiner was one of five women honoured this year by the Governor General’s Awards in Commemoration of the Persons Case. Shiner is a long-time activist for women’s rights in the union, the NDP and her community in Newfoundland and Labrador.

Equality staff have developed demographic profiles of low-paid CUPE members, raising awareness about precarious employment and equity-seeking groups. The profiles are part of a larger project studying how precarious work affects women, particularly those who are further marginalized as racialized women, Indigenous women, women with disabilities, and LGBTTI women.

CUPE also continued the A solidarity of abilities campaign on disability rights in the workplace. The Union Development Department also piloted its new Duty to Accommodate workshop for members.