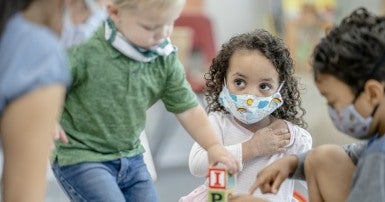 Newfoundland and Labrador will receive more than $347 million between 2021-22 and 2025-26 to implement the Early Learning and Child Care Action Plan.

CUPE has raised the pressing issue of recruitment and retention and is encouraged that the Newfoundland and Labrador government will conduct labour force adjustment analysis specific to Early Childhood Educators (ECEs) in order to develop a wage-grid for ECEs by the end of 2022, with full implementation by 2023. The current low wages are a significant deterrent for workers in the child care field.

In addition, the creation of an Early Learning and Child Care Advisory Committee by March 31, 2023 is seen as a positive step. CUPE will be watching for advocates of public and non-profit child care to be named to the committee. The committee will advise the Minister of Education on a wide range of early learning and childcare issues.

The government will also increase the percentage of fully certified ECEs working in the sector by 15 per cent by the end of 2023 and to at least 60 per cent by the end of 2025. To help facilitate this, the government will increase bursary funding for ECEs through the ECE Graduate Bursary Program, the ECE Trainee Bursary Program and the ECE On-Campus Field Placement Bursary. CUPE continues to encourage the government to do more to support ECEs and public child care.

To support early learning and child care providers, the province will also look to enhance the Operating Grant Program to ensure that regulated operations remain financially viable and to retain and attract new ECEs. CUPE will continue to advocate for child care services to be delivered by public and non-profit entities.

CUPE congratulates all the advocates who have been calling for over 50 years for affordable universal child care. Together we will achieve a pan-Canadian public, high quality and accessible child care system.