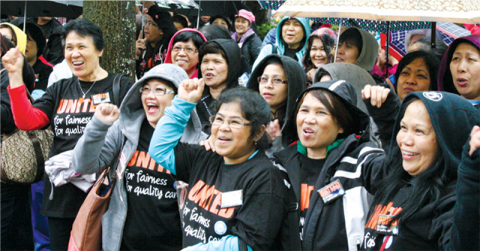 Workers who come to Canada under the Temporary Foreign Workers Program (TFWP) do not have access to the full protections domestic workers enjoy, even in workplaces covered by collective agreements.

The union has an obligation to protect all workers, however support will be difficult to provide if the union is unaware of members working under TFWP permits. Getting information on foreign workers who have been hired is a challenge for unions, let alone providing them with protection from exploitative employers.

Despite these challenges, CUPE members are making strides to ensure TFWs are made aware of their rights.

The Hospital Employees’ Union (HEU), CUPE’s health care division in B.C., won a settlement agreement that forces an employer to provide the union with notification of new employees hired through the TFWP. The new member must also be told that they are represented by a union in writing, and an orientation session must happen in their first 30 days.

According to the Alberta Federation of Labour, many employers have developed ways of hiring TFWs, even when unemployed workers with the desired skills are present in the geographic area. In some cases TFW recruiters have workers lined up even before the jobs have been posted.

Employers and governments are using the TFWP to distort the labour market, drive down wages and undermine unions.

While most of the program’s growth from 2005 to 2012 was at the lower-skill level, the TFWP’s main focus is recruitment of high-skill workers. Bringing in high-skill foreign workers allows employers to avoid investment in domestic training and apprenticeships programs.

By the end of 2012, there were over 340,000 workers in the TFWP residing in Canada. The majority of the workers are in Ontario, Alberta and B.C.

The Employer shall notify the Union of its intention to make an Application for Temporary Foreign Worker employees no less than one month before submitting the Application to the applicable government body.

The Employer shall notify the Union of the results of each Application within one week of receiving the results.

The Employer shall provide the Union with an up-to-date list of Foreign Worker Employees that includes job title, work site and work term start and end date, on the first business day of each month unless the preceding list provided to the Union continues to be most up-to-date.

New employees will be advised that a collective agreement is in place and be provided with the name of their shop steward.

The Chief Shop Steward or designate and the new employee shall be given an opportunity to meet within regular working hours without loss of pay for up to fifteen (15) minutes during the first thirty (30) days of his/her employment.